Gary McGehee: Home on the Range 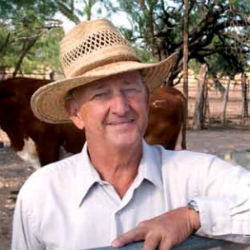 When 63-year-old West Texas rancher Gary McGehee began experiencing episodes of tingling in his left shoulder and arm in 2010, he was treated for heart disease in San Angelo, the town located nearest the ranch he and his wife Carolyn own in Irion County. His cardiologist diagnosed stress-related angina and prescribed medication that McGehee took for nearly a year. But his condition continued to worsen, and the episodes became more frequent and more severe.

“Gary began having symptoms about a year before he came to see me,” says Nitin Tandon, MD, a neurosurgeon at the Mischer Neuroscience Institute and an associate professor in the Vivian L. Smith Department of Neurosurgery at The University of Texas Health Science Center at Houston (UTHealth) Medical School. “In addition to the left arm and shoulder numbness, he was blanking out frequently, which suggested he was having complex partial seizures.”

In December 2010, McGehee suffered a tonic-clonic seizure that triggered a visit to an emergency center in San Angelo, where an MRI study revealed an extensive brain mass involving the right temporal lobe, the hippocampus and the right insular cortex – and extending partly into the inferior portion of the frontal lobe. His son Michael McGehee, MD, a third-year resident at the Baylor/UTHealth Alliance for Physical Medicine and Rehabilitation in Houston, arranged for him to be seen by Dr. Tandon at the Institute.

“By the time I saw Gary, he was having five or six uncontrolled seizures daily despite the multiple anticonvulsant medications he was taking,” Dr. Tandon says. An MRI confirmed the location and extent of the tumor, and using Wada testing, Dr. Tandon and his team confirmed their suspicion that the side of the brain opposite the tumor was his dominant hemisphere for language and memory. They took McGehee to the OR on January 17, 2011.

The tumor Dr. Tandon removed measured 8 x 7 centimeters, about the size of a peach. “Despite its large size and intrusion into several important structures in the brain, we were able to resect the entire visible tumor,” the neurosurgeon says. The pathology report confirmed a grade 2 astrocytoma, and McGehee’s case was discussed at Micher Neuroscience Institute’s weekly multidisciplinary Brain Tumor Board.

The Course of Treatment

“Balancing the benefits and risks of treatment versus observation based on Mr. McGehee’s physical health, tumor size and location before surgery, age and seizure frequency, we recommended the standard-of-care treatment for tumors of this type to kill any cancer cells undetectable by standard imaging techniques,” says fellowship-trained neurologist and neuro-oncologist Jay-Jiguang Zhu, MD, PhD, who is an associate professor in the department of Neurosurgery and the department of Neurology at the UTHealth Medical School. “He underwent six weeks of radiation and daily oral chemotherapy with temozolomide, followed by temozolomide only at five days out of 28 days.”

McGehee tolerated the treatment well, with only mild fatigue, and is now followed by blood work every four weeks and MRI studies every two to three months. Since undergoing treatment, he has had no seizures and no tingling in his arm. His MRI on June 16, 2011, showed no evidence of tumor recurrence. “His prognosis is excellent,” Dr. Tandon says. McGehee’s case stands out to Dr. Tandon for three reasons. “First, he suffered for nearly a year without a correct assessment of the etiology of his symptoms. Second, it was an uncommon tumor – an extensive paralimbic-insular glioma that had grown to this size without major disruption of essential functions. In a surgery of this type, it’s of great importance to preserve the subcortical pathways as well as the vessels supplying the blood to the tumor. The surgery can be complex and long – Gary’s took nine hours – so many surgeons prefer to do subtotal resections or biopsies of gliomas like these, because they’re unwilling to take the risk of pushing the surgery to the point of accomplishing a complete resection. As has been shown multiple times, the extent of resection correlates strongly with the long-term outcome. And lastly, for me it was a great privilege to take care of a family member of one of our colleagues.”

Back on the Ranch

The McGehees, who were back working the ranch as soon as his treatment was completed, say they felt like they were in the right place at the right time. “From my perspective, it was a miracle that we got Gary through this and that miracle came through Dr. Tandon,” Carolyn McGehee says. “He rearranged his schedule to get Gary into surgery as quickly as possible. We were fortunate that our son in Houston got us to the right people, and that everything went smoothly. We’re still amazed.”