The Cause of Frequent Headaches 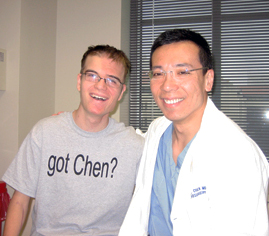 When David Baker started having headaches last fall, his parents were concerned enough to schedule an appointment with his pediatrician. "My husband suffered from migraines as a teen, and David was in a new school that was more challenging," says his mother Kathe Baker. "We were hoping the family history of migraines and the stress of a new school were the cause."But by October, David was living with constant headaches. "We made an appointment with a headache specialist but couldn't get in until mid-December," Baker says. "I was volunteering at David's school on December first. He came to me and told me his headache was really bad. He was white as a sheet, and as we walked to the car, he vomited."

His pediatrician prescribed a strong medication that failed to stop the pain. When a second dose of the medication provided no relief, the physician sent them to the emergency room at Texas Children's Hospital where MRI and MRA studies revealed a 6-centimeter aneurysm in the left hemisphere of the brain, and a second aneurysm 1.5 centimeters in diameter in the middle brain. Neither aneurysm had existed in 2002 based on MRI and MRA studies performed at that time.

David was admitted, stabilized and seen by a neurosurgeon who told the Bakers he knew of only three neurosurgeons with the skill to operate on David - one who practices in Chicago, another who operates in Phoenix and a neurosurgeon affiliated with Memorial Hermann-Texas Medical Center named P. Roc Chen, MD. An assistant professor in the Department of Neurosurgery at The University of Texas Medical School at Houston, Dr. Chen specializes in cerebrovascular neurosurgery, endovascular neurosurgery and skull base procedures. He is one of a handful of surgeons in Texas accomplished at both catheter-based coil embolization and open microsurgery to treat intracranial disease. In 2005, he completed a fellowship in cerebrovascular/skull base neurosurgery at Barrow Neurological Institute in Phoenix under the mentorship of renowned neurosurgeon Robert F. Spetzler, MD

"David presented an unusual, highly complex, subspecialized case," Dr. Chen says. "It was challenging but it was also very treatable. We had to move quickly because a symptomatic aneurysm of that size with increasing headache indicates that rupture is imminent."

On December 4, 2008, in a very long surgery, Dr. Chen proceeded a left-hemisphere artery bypass surgery. David's atrophic left hemisphere, the result of a mild form of cerebral palsy, made the procedure more complicated.

"After that surgery, we all needed a little time to regroup," Baker says. "David remained on a ventilator in the Neuro ICU while he regained strength. It was an incredibly stressful time for us, but within 24 hours I was completely overwhelmed by the quality of care - and caring - we received. Everyone on the ICU staff was phenomenal. They cared about me, they cared about David and they cared about our family. I fell in love with them for the care they provided."

David was scheduled for a coil embolization on December 10, his 16th birthday. "The night before the procedure, the nurses allowed us to throw a surprise party for David in the Neuro ICU waiting room. When they wheeled him into the room, there was a huge crowd of people there to greet him. It was a beautiful night. Dr. Chen had prepared David for the fact that he faced some risk of decreased right-arm and right-leg function following the coiling procedure. David prayed that he would come through the procedure totally complete - and that it would snow because it had always snowed on his birthday when we lived in Colorado."

Coil embolization, also known as endovascular coiling, is a minimally invasive procedure in which the surgeon carefully navigates a small catheter inserted through the femoral artery into the aneurysm, guided visually by images of the vascular system. Very fine platinum coils of varying sizes and lengths are gently and progressively deployed within the aneurysm, sealing off the circulation and resulting in subsequent clotting of retained blood in the aneurysm.

"I'll never forget the moment when Dr. Chen came to me and my husband and all the people who were waiting with us. It was around four or five in the afternoon," Baker says. "He told us it was a beautiful procedure, and the coil embolization had worked. I hadn't thought much about David's prayer but sometime later we overheard people coming into the hospital saying that it was snowing outside. When David started waking up, he could move his right arm and leg. It was a miracle."

In January, Dr. Chen gave the Bakers the go-ahead to take David snowboarding in Colorado prior to treating the second aneurysm. "We staged the procedures at eight weeks apart to give David a break before proceeding with the definitive treatment for the second aneurysm," Dr. Chen says. "He's a 16 year old boy. It's important that he go on living life."

MRA and MRI studies done on February 18 and a cerebral angiogram done on February 19, the day before the second procedure, revealed that the large fussiform aneurysm in the anterior communicating artery of the middle brain had grown from 1.5 to almost 2 centimeters. Dr. Chen used microvascular techniques to clip the aneurysm reconstructively and reinforced the artery using a unique technique.

When a surgeon has the knowledge and skill to treat cerebrovascular disease using the traditional microsurgical approach as well as the latest endovascular technique, it eliminates the bias for one treatment over the other. Dr. Chen believes his knowledge of both techniques can provide a better general outcome for the patient.

"Both were complex and risky aneurysms," Kathe Baker says. "Dr. Chen told us that David had a 50-50 chance of making it through each day without a rupture. And with the second aneurysm, he had to reconstruct the entire artery. How many doctors can do all that? Dr. Chen can do it all, and he does it with excellence.

"Looking back, I can say that it was a great ride," she says. "I never doubted that God was with us every step of the way because of the people he put in our path. Dr. Chen was one of them."