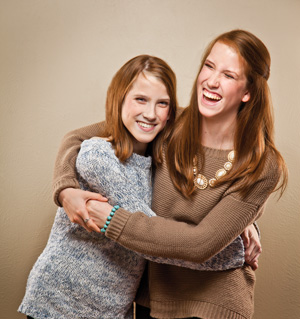 They spend their days consumed by full coursework loads and mountains of reading, even as they navigate their newfound independence and cope with living away from home for the first time. But they’re also learning something else, something no other pair of siblings is likely contending with: how to live apart from each other, studying at different schools, in different cities, after a lifetime of togetherness – including nine months spent inside the womb and 10 outside of it, as conjoined twins.

The twins were separated in April 1997. Eighteen years later, sitting in the living room of their parents’ Copperfield home, they reflect on what it’s like to have more distance between them than they’ve ever known. Caitlin is studying education at Concordia University in Austin, and Emily’s at the University of Houston’s Hilton College of Hotel and Restaurant Management. Before college, they had never been apart from each other for more than three weeks.

“When I want to be alone, it’s really nice,” says Emily, who’s technically the older of the two, though Caitlin is quick to point out that their birth certificate lists them as the same exact age. “But when I want company, I miss her so much.” Caitlin chimes in: “Starting at a new school where none of my friends know Emily, I am my own person and I do appreciate that aspect of it,” she explains. “But, she’s always been there. I have a built-in friend.”

The young women may be identical twins, but they possess strikingly different personalities, not to mention hairstyles. Caitlin is more athletic and sarcastic. Emily is a reader and more sentimental. Last spring, the two graduated as co-valedictorians of their high school class at Lutheran High North in the Oak Forest neighborhood of Houston. They gave the speech together, even speaking the first few words in unison, although reaching consensus about what to say was a challenge. “I wanted it to be all funny, and she wanted it to be mushy,” says Caitlin. “I would write something I thought was hilarious and she would say, ‘You can’t put that in there,’” laughs Emily.

Did you know? 70 percent of conjoined twins are girls.

Such differences don’t keep the two from being close. “It’s almost like if we were put together,” Emily explains, “we would be a”—and as if on cue, they say simultaneously, “whole person.” But of course, each is a whole person, like any other, and neither remembers being conjoined, or the operation they underwent at Children’s Memorial Hermann Hospital as babies.

On the other hand, their doctors, including Dr. Kevin Lally – now Professor and Chair of Pediatric Surgery at McGovern Medical School at UTHealth and Chief of Pediatric Surgery at Children’s Memorial Hermann Hospital – will never forget it. How much experience with conjoined twins did he have then? “Zero,” he says now. “It is so rare.”

Fortunately for the twins, while they were joined at the chest, they shared only one vital organ, the liver. “We saw two heartbeats, which is critical,” says Dr. Paul Cook, an OB/GYN affiliated with Memorial Hermann-Texas Medical Center and the physician for Crystal Copeland, the twins’ mom. Dr. Cook notes that had the twins shared a heart, they would likely not have survived. 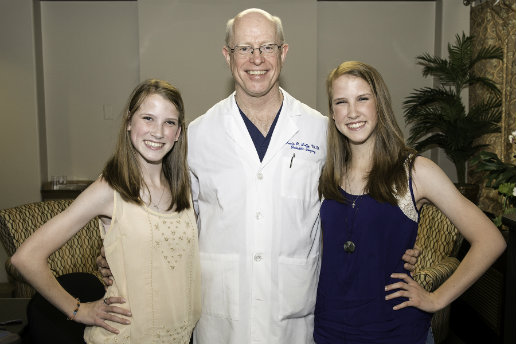 Just days after they were born, Dr. Lally and the rest of the team at Children’s Memorial Hermann Hospital discovered that the bile system only drained to one of the twins. “If we had cut through the liver at that point, one of the girls would have been left with no bile drainage at all,” Dr. Lally explains. “That would either be fatal or require liver transplantation.” So, they waited for 10 months before separating them. “That was a long period of concern and anxiety for all of us,” Dr. Lally remembers. “Sometimes things work out and this was one of those times.”

When the morning of the surgery came, the girls were in the operating room before 6 a.m. to begin with anesthesia. By 9 a.m., the first incision was made. The equipment and surgical caps of the 18 physicians, surgeons, nurses and technicians were clearly distinguished with red or purple markings with overhead signage identifying red as Caitlin’s team and purple as Emily’s. Once the upper body cavity was split, Dr. Lally and team began slowly dividing the liver with a high-powered cautery. When the twins were separated, an additional operating table was moved over and the medical staff divided into their teams. For team Emily, a piece of the intestine was attached to her bile duct for drainage, and team Caitlin was beginning closure.

After more than six hours of surgery, the girls were moved to the Pediatric Intensive Care Unit, and just 10 days after their delicate separation procedure, the twins went home. The successful surgery was the culmination of several months of planning by the surgical and clinical teams. After the specialized care Caitlin and Emily received at Children’s Memorial Hermann Hospital, Caitlin returned for a fairly routine procedure as she had a similar intestinal issue as her sister had at birth. Once again, Emily was by her side.

“Medically, it was a huge deal that they survived, went home, and went on with their lives,” says Dr. Cook, calling the entire process “a team effort.”

While the girls’ survival was, of course, priority No. 1, other concerns soon presented themselves. The Copelands were worried about all the attention and curiosity the conjoined girls – not to mention the rare operation – would attract, creating undue stress for the family. To avoid it, Dr. Cook helped the family remain anonymous, registering them in the hospital under an alias. And anonymous they remained until last summer, when the family finally felt comfortable going public, telling their story on Good Morning America.

Did you know? The overall survival rate of conjoined twins is somewhere between 5 percent and 25 percent.

Meeting the team at Children’s Memorial Hermann Hospital again for the TV segment really brought home the life-or-death ordeal the twins had faced as children. Previously, their scars (which are not inconsiderable) were the only tangible evidence of what they’d been through. “It put it in perspective to know that it actually happened,” says Caitlin, her sister Emily adding, “It made it more real.”

Though they’re open about the experience now, it wasn’t always that way, particularly during those uncomfortable middle school years. Now, “Everyone has been very interested and wants to talk to me about it,” Caitlin says. “They all end the conversation with, ‘That’s so cool!’” The questions do get somewhat repetitive: “Can you feel when the other one gets hurt?” people will ask. Or: “What is she thinking right now?”

Of course, she doesn’t deny that her bond with Emily is special. “Whenever she is upset, she doesn’t have to say anything,” she says. “I can immediately tell.” But – as becomes apparent during our conversation about college – they can still surprise each other.

“I had always assumed we would go to the same place,” says Emily.

“I would be like, ‘I don’t have to worry about a college roommate because I’ll be with my sister,’” remembers Emily. “All through high school and right up until the summer before senior year, I totally assumed we would go to the same place.”

“What? I always knew we wanted to do completely different things.”

“I always assumed I’d make it work where she wanted to go,” says Emily.

“I knew it would have to happen eventually,” replies Caitlin. “We couldn’t live together for our entire lives. I mean, we could, but that would be a little weird.”

It’s safe to say that no matter what, the twins will remain close, even as they go their separate ways and begin distinguishing themselves in ways that go far beyond the circumstances of their unique birth. “I don’t want it to define us,” Emily says. “We don’t want to be known as the conjoined twins. We want to be Caitlin and Emily.”