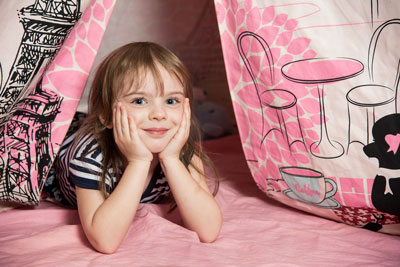 As Sabrina sat at her 16-week checkup, she was expecting her appointment to be ordinary. However, after receiving her ultrasound, she found out her baby girl was diagnosed with a birth defect known as gastroschisis. Shocked and scared about her baby’s health, her obstetrician referred her to The Fetal Center at Children's Memorial Hermann Hospital (CMHH).

Gastroschisis is a condition that develops early in pregnancy when the baby’s abdominal wall muscles do not form correctly, causing the intestines to protrude from a hole in the abdomen beside the umbilical cord. After the baby is born, the defect must be repaired surgically in one or multiple procedures that return the organs to the proper position and close the opening. If multiple surgeries are required, the process may be staged over a period of up to two weeks.

According to the Centers for Disease Control (CDC), gastroschisis affects one in 2,200 babies in the United States, with published survival rates of 83 percent to 97 percent.

The U.S. figures – while encouraging – are not always comforting to a mother like Sabrina.. Typically, gastroschisis babies are boys and born to very young mothers, neither being the case for Sabrina.

“It was heartbreaking news,” she recalls. “I didn’t understand what the diagnosis meant, so I did a ton of research.” What she found on the Internet was “horrifying,” she says. “I saw lots of cases where babies died, but I didn’t hear any success stories.”

After all the negative information she had found online, her multispecialty team of affiliated physicians helped to restore her hope, providing her with in-depth detail about gastroschisis. “It’s so important to give moms hope as soon as they are diagnosed,” Sabrina says.

According to Charles S. Cox, MD, pediatric surgeon affiliated with CMHH and McGovern Medical School at UTHealth, although infants with gastroschisis usually deliver slightly preterm and are somewhat smaller than normal, they can go on to live a normal, healthy life without complications related to the condition. Parents’ best option for a safe and successful delivery is a facility with a Level III or IV neonatal intensive care unit (NICU) – capable of caring for the smallest and sickest of newborn babies with the highest needs – and round-the-clock availability of pediatric surgeons.

“I read that a C-section was almost a given,” Sabrina remembers, “and that mothers often weren’t even allowed to see the baby. I told my doctors I wanted the most normal delivery possible and they listened to me.” Sabrina trusted the expertise of her physician team and the quality of care Cassandra would receive; she was at ease with her delivery plan at Children’s Memorial Hermann Hospital. Sabrina was induced at 37 weeks and delivered Cassandra without a cesarean section.

When the big day came, Cassandra came into the world with an entourage. In addition to her medical team and her father, the delivery was attended by a small team of residents and medical students who were ready to help care for both Cassandra and Sabrina.

According to the Centers for Disease Control, the prevalence rate of gastroschisis has increased 263 percent over the last 18 years (leading up to 2012) – this continues to puzzle physicians and researchers. “It was kind of strange for those extra people [fellows and residents] to be in the delivery room,” Sabrina recalls, “but if having them there would help bring greater awareness and education to doctors and parents, I wanted to be a part of that.”

Among the VIPs at the delivery was Dr. Cox, whose job was just beginning when Cassandra was delivered. Sabrina got to kiss and snuggle her newborn for a few minutes before she was transported to surgery. Cassandra’s father, Carl, was able to watch the whole procedure from a window in the Neonatal Intensive Care Unit (NICU), while Dr. Cox “gently tucked everything back in” (as Carl described it). Dr. Cox used a sutureless closure technique to cover the repair with the umbilical cord stump. This simple technique is cosmetically appealing, leaving minimal scars, and minimizes intra-abdominal pressure.

Not long after Cassandra was born, Sabrina connected with Avery’s Angels, a national nonprofit foundation established in 2009 by a North Carolina couple who lost a son to gastroschisis a year earlier. Inspired by the “angels” who had helped them through their son’s illness, they wanted to create a community of support, education and awareness for other families.

That’s where Sabrina started to hear the success stories – and to tell her own. During the 37 days Cassandra spent in the Level IV NICU at Children’s Memorial Hermann Hospital, Sabrina wrote a blog for Avery’s Angels, sharing with other parents the message of hope that she’d looked so hard for.

Dr. Cox reiterates that message of hope. While gastroschisis is a major birth defect, parents need to know that it is almost always curable with surgery. According to Dr. Cox, while there are cases of complicated gastroschisis, the majority require a single operation to reconstruct the abdominal wall. “Long term, most infants live normal lives,” he says, and only 5 percent to 10 percent require future surgery.

Today, four-year-old Cassandra is, as her mother describes, a “very active, extremely loving little peacemaker.” Surrounded by the adoring men in her life – her dad and two brothers, 10-year-old Charles and 18-month-old Clark – she’s all about princesses and anything pink or purple. Cassandra is a happy, healthy normal preschooler with a bright future and no residual health problems.