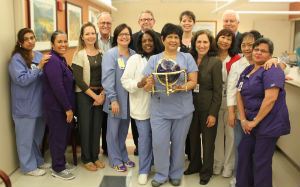 Elizondo went on her first medical mission in 2006 with the help of Memorial Hermann Medical Missions. Since that time, Elizondo has completed five medical missions serving nearly 4,000 people in need. Elizondo served her most recent mission in Guatemala in the fall of 2014, with HELPS International and Iaomai Medical Ministries.

“It’s a rewarding experience and yet very humbling at the same time,” says Elizondo. “People will line up overnight to see a doctor or a nurse. You work so hard every day to help people get the care they need and yet you never get tired.”

Elizondo was surprised with the award during a meeting at Memorial Hermann Southwest. “I never expected it,” says Elizondo. “The team called me into a room, everyone was there and I thought someone must be getting an award. I had no idea it was me!”

“Our program is unique in that we allow physicians and staff to choose the team they want to be a part of and the mission field in which they want to serve,” says Tim VanDuivendyk, DMin, Vice President, Chaplaincy and Spiritual Care at Memorial Hermann. “The way we’ve set up the program allows us the opportunity to provide care to so many more people in need around the world.”