In 2017, Daniel Begnaud’s world as he knew it came crashing down when he was diagnosed with stage IV colon cancer at the age of 30. A father of a 1-year-old son, he was initially told that it was unlikely he would ever have more children. On top of a cancer diagnosis, that was a hard pill to swallow. From the moment his son, Luke, was born, he knew he wanted more children. He never dreamed it might not be an option.

Kids have always been a part of Begnaud’s life. He is youth minister at Central Baptist Church in Buna, Texas, and before that was a schoolteacher. During his treatment, the youth group jumped in and took over the ministry, helping in any way they could. He still preached his sermons, but with a pump and a fanny pack. In summer 2018, they arranged the missions completely around his cancer care, doing local work with the elderly and cleaning up parks and schools instead of traveling out of state.

“Up until I was told I had cancer, my wife and I were living the dream,” says Begnaud. “We were checking all the boxes – career success, buying our first house, celebrating five years of marriage, and Luke turned 1. There were so many great things happening in our lives, but in hindsight, I wasn’t feeling my best.”

While Begnaud didn’t feel sick, he began feeling sluggish. He chalked it up to being a tired parent. His doctor ordered blood work and discovered Begnaud was anemic, so he prescribed iron supplements. But after finding blood in his stool, Begnaud had a colonoscopy, which revealed a large tumor in his colon. Later scans showed that the cancer had spread outside of the colon to the liver, abdomen and lymph nodes.

Medical oncologist Julie Rowe, MD, associate professor at McGovern Medical School at UTHealth, who sees patients at Memorial Hermann Cancer Center-Texas Medical Center and Memorial Hermann Cancer Center-Northeast, says that while screening is definitely the key to catching cancer earlier, in Begnaud's case, he did not meet the standard screening criteria because of his young age.

“I think, in general, a person needs to ‘know’ his or her body well and watch for signs that are not normal, such as unintentional weight loss, or changes in bowels or urine,” says Dr. Rowe. “I encourage my patients to keep track of the things they feel are unusual and not to ignore them. Ignoring these symptoms can sometimes lead to more advanced cancer.” 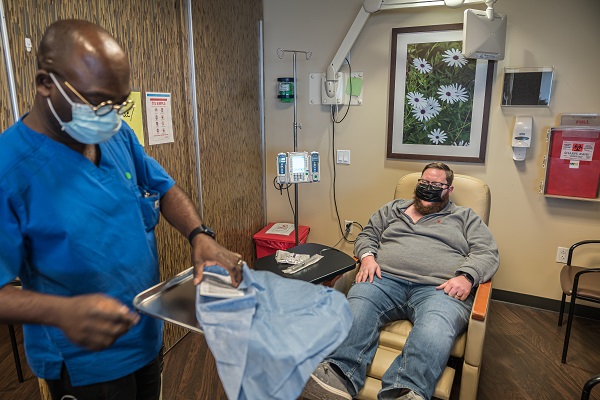 Dr. Rowe remembers the heartbreaking conversation with Begnaud and his family when she told him he would be on chemo for the rest of his life, would never be able to have more children, and had a life expectancy of less than 2 years. “But Daniel proved me wrong. And in this case, I wanted to be proven wrong,” she says. “He is a true testimony to his faith and believing his cancer would be cured.”

Dr. Rowe says it is unusual to see people in their early 30s with advanced colon cancer, but more and more young patients are being diagnosed. “Cancer research is focusing on trying to understand why this is happening and on finding ways to improve screening for cancer,” she says. “It’s also why the recommended screening age was recently changed from 50 to 45.”

“I remember when I went in for my colonoscopy, my biggest concern was where I was going to eat pancakes afterward,” recalls Begnaud. He never considered that he would be starting his first of 21 rounds of chemo. When Begnaud was told he had to undergo chemo, his first question was, ”Will I lose my beard?”  He eventually did, but it grew back, as did the hair on his head, but with a wirier texture.

The plan was to shrink the tumor enough to do surgery, but before this happened there was a hiccup in his plan when he experienced severe pain. Doctors discovered his colon had stopped working and had to put in a stent. He knew prayer was now more important than ever.

In July 2018, those prayers were answered when scans showed the chemo had worked and he was a candidate for surgery. His 13-hour surgery included a colon resection, gall bladder removal, liver ablation and a peritoneum and lymph node removal. In October 2018, he was given a clean bill of health. His scans showed no evidence of disease.

Despite all of the bad that comes with a cancer diagnosis, he says the silver lining is that he can be an advocate for his children. “It was a numbing feeling to learn that the cancerous tumor had been growing in my body for about 10 years, meaning it started when I was 20. I now know that my children will need to undergo screening around that time because of my diagnosis. At least now I have the tools and knowledge to be proactive and potentially prevent colon cancer for them.”

Although Begnaud was diagnosed at such a young age, he doesn’t have a family history of colon cancer. “Many people think if they don’t have a family history of cancer they don’t need to worry about screening, and I am living proof that this is not true. My advice is that if you have any inkling that something isn’t right, get screened,” says Begnaud. ” A colonoscopy isn’t something that anyone looks forward to, but I will take it over a cancer diagnosis any day. If caught early, it could add years to your life.”

Thankfully, it looks like that is the case for Daniel. In July 2019, he rang the bell that signified the end of his treatment alongside 25 family members, friends and his physician, Dr. Rowe. In March 2020, his scan came back clear. He says the only thing that topped that was the birth of his daughter, Ava, one week later.

Daniel’s road to recovery has included some detours. “I had a recurrence in July of 2020. In August, I had a small mass removed laparoscopically followed by 11 more rounds of maintenance chemo,” he says.

In February 2021 he rang the bell a second time, alongside staff and patients due to COVID-19 safety protocols.

“It was different ringing the bell the second time because my family and friends weren’t able to be there,” he said. “But, it was good because I had the opportunity to enjoy the moment with the staff and other patients. It’s a true blessing to have received care at Memorial Hermann. Everyone on the staff went above and beyond, taking care of every physical and emotional need for myself and my family.”

Thank you for contacting Memorial Hermann in regards to colonoscopy. We have received your inquiry, and a team member will contact you soon.