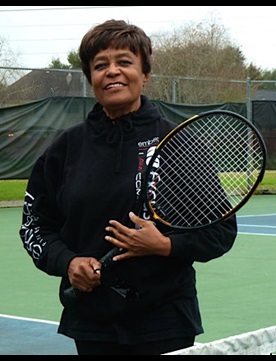 Venola Jolley barely heard the cheers from the crowd when she and her partner scored the winning point in the Women’s Doubles Tennis Match at the 2014 Transplant Games of America.

She was so overcome with joy – and shock – at winning that the sweet victory did not sink in immediately. After all, it was only about 17 months after her lifesaving heart transplant.

Jolley taught for 37 years in the Denver Public Schools, after being recruited there when she graduated from Prairie View A&M University. After retiring in 2004, she returned to Texas to be close to family. She missed the classroom, so she happily taught in Fort Bend ISD for five years before retiring a second time.

With ischemic cardiomyopathy, the heart’s muscle is weakened. The left ventricle, the main pumping chamber of the heart, is usually enlarged and dilated, which can be a result of coronary heart disease. Jolley’s condition had deteriorated to the point she could barely breathe and was very weak. “I was not thinking clearly, because my brain was affected by the lack of oxygen,” she says.

She was referred to Biswajit Kar, MD, chief and program director of the medical division at the Center for Advanced Heart Failure at Memorial Hermann Heart & Vascular Institute. Jolley admits she was very frightened when she arrived to be seen by Dr. Kar. “Dr. Kar confirmed that I had severe heart damage and that my brain was not getting enough oxygen. He immediately reassured me, ‘We will fix this,’ and I started to cry.”

That moment started the journey that would transform her life.

Dr. Kar explained that Jolley’s only option was a heart transplant. “Of course I was scared, but I really had no choice,” she says. Within just a few days of her first meeting with Dr. Kar, a heart became available and Jolley had her transplant on December 19, 2012.

Her recovery was slow but steady. “The nurses were phenomenal and supported me in every way,” she says. “My admiration for Dr. Kar, who came to see me at all hours of the day and night, knows no bounds.”

Right after New Year’s Day, Jolley was able to go home. “My energy was low and I was weak, but my outlook was bright. Knowing I was going to live was very powerful.”

Savoring The Path From Patient to Champion

Six months later, Jolley decided to try getting back on the tennis court. She loved to play, but hadn’t done so in nearly 40 years.

“In the beginning I just wanted the exercise,” she says. “Playing tennis again made me want to get up in the morning. I started playing doubles at Memorial Park at 7 a.m., three days a week, eventually playing singles as well. Now I enjoy a seniors’ tennis group in Sugar Land.”

Showing the same grit and determination that buoyed her through transplant surgery and recovery, Jolley agreed to compete in the Transplant Games of America, held in Houston in the summer of 2014.

The Transplant Games feature the participation of thousands of organ recipients, donors, donor families, and medical and transplant teams. The biannual games are a multi-sport celebratory event that helps promote the need for organ and tissue donation.

Participants came to Houston from all over the world, and no one was more surprised than Jolley that she was not only there but successfully competing against women in their 20s. She proudly took home four medals, including first place in Women’s Doubles, third place in Women’s Singles and one for walking the 5K in just about one hour.

“The experience was absolutely amazing, but the most exciting moment was winning!” she says.

That competition was exactly one year after she picked up a tennis racquet for the first time in nearly four decades and about 18 months after her heart transplant.