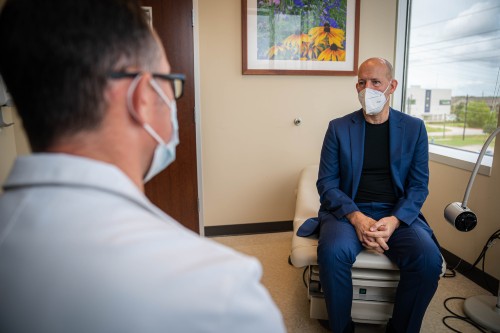 During a routine physical in November 2020, 58-year-old Troy Griffin mentioned to his family doctor that he had been experiencing some minor urinary symptoms—a little stopping and starting of his urine stream and a bit of urinary urgency and frequency. His doctor performed a PSA test, which measures the amount of prostate-specific antigen (PSA) in the blood. The normal range for a healthy 58-year-old male is between 0 and 4. Griffin’s was 80.

“The MRI revealed a very suspicious lesion, a mass replacing almost the entire prostate, extending to the bladder wall,” says Dr. Mucher. “This, coupled with his elevated PSA, was highly concerning.”

In early January 2021, Dr. Mucher performed a UroNav® prostate fusion biopsy using specialized equipment which allows the physician to perform a transrectal ultrasound of the prostate and to “fuse” the ultrasound images, in real time, with the prior MRI images. Memorial Hermann Sugar Land was the first hospital in Fort Bend County to utilize the UroNav® system.

A major concern was whether or Griffin’s cancer had metastasized, or spread to other parts of his body. “After prostate cancer spreads locally to regional lymph nodes, it typically spreads to the bone,” says Dr. Mucher. “All of the studies, including a ‘head to toe’ bone study and a CT, showed the patient’s cancer had not, which was surprising, given his elevated PSA.”

Dr. Mucher discussed all of the results with Griffin. “Dr. Mucher was positive from day one, but he never sugarcoated anything,” says Griffin. “He said, ‘Here is what it is. You have all of the indicators of high risk. We need to make a plan and take action.’”

The recommended plan included surgical removal of Griffin’s prostate potentially followed by radiation and hormone therapy. In early February 2021, Dr. Mucher performed a Robotic Assisted Laparoscopic  Radical Prostatectomy (RALP), a minimally invasive procedure to remove Griffin’s prostate, and a bilateral pelvic lymph node dissection, removal of a chain of lymph nodes on both sides of the pelvis. Griffin spent one night in the hospital and was home the next day.

Dr. Mucher says patients’ PSA levels are typically checked 3 months after surgery, but in Griffin’s case, he checked about 6 weeks afterwards. “Griffin’s PSA had decreased to 5 (from a high of about 117 before surgery),” he says, “but we want it to be undetectable, less than 0.1. A month later, his PSA was 5.3, indicating the presence of some residual cancer.”

An Axumin® PET scan, a test to detect the metabolic activity of cancer, showed evidence of cancer where the prostate had been, adjacent to the bladder. In June 2021, Dr. Mucher referred Griffin to affiliated radiation oncologist Shariq Khwaja, MD, clinical assistant professor in the Vivian L. Smith Department of Neurosurgery at McGovern Medical School at The University of Texas Health Science Center at Houston (UTHealth) and medical director of radiation oncology at Memorial Hermann Memorial City Medical Center.

Dr. Khwaja prescribed a series of 39 radiation treatments, which began in July 2021. “Our goal was to get as much (of the cancer) out as we could with surgery then let the radiation do its work,” says Dr. Mucher.

Dr. Mucher is optimistic about Griffin’s outcome. “It would be an absolute slam dunk if we could call this a cure,” he says. “If we can get his cancer undetectable, and keep it undetectable, that would be one of the great prostate cancer victories of my career.”

Griffin is also upbeat. “My philosophy is that it could always be worse,” he says. “And my approach is to take life as it comes.”