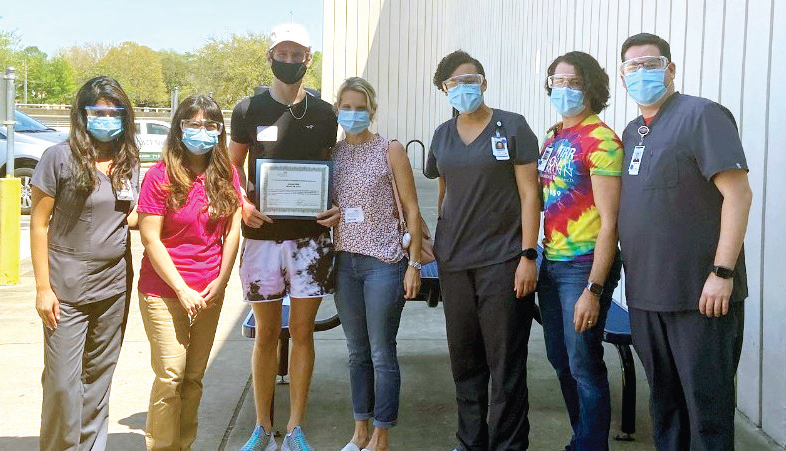 Late last year, Sam Mills was living the carefree life of a teenager. He was active in school, loved working his part-time job and spent his free time with his four siblings, parents and friends. However, the day after Christmas in 2020, the 17-year old’s life changed instantly, when he lost control of his car while heading home from work in Katy, Texas. Sam was heading home from work when he lost control of his car in Katy.

His vehicle flipped multiple times and he was ejected approximately 40 feet. The car finally landed upside down, shattering all of the windows. A couple driving by, noticed the car off the road and found Mills lying in tall grass. They called 911 and soon after, Memorial Hermann Life Flight® arrived on the scene and transported him to Memorial Hermann-Texas Medical Center, one of two Level 1 Trauma Centers in the Greater Houston area.

“The police came to our home to notify us that one of our children had been in a bad accident and was picked up by Life Flight,” said Carrie Mills, Sam’s mother. “Like any parent, we were in shock and devastated. My husband and I made the nearly hour drive to the hospital while calling the rest of our children to alert them of what had happened.”

When Carrie and her husband arrived at the hospital, Sam was in the Emergency Center unable to move and on a ventilator to help him breathe. He had suffered a traumatic brain injury (TBI) with bleeding and swelling on the left side of his brain and fractures on the left side of his face and body. The active teen, who played football and participated in track and other outdoor activities, would spend the next ten days fighting for his life in the ICU.

“I don’t remember much from my time in the hospital, but I do remember waking up not knowing where I was or why I was there,” Sam said. “I was shocked by the details of what happened when my mom shared them with me.”

A few days later, as his condition improved and his body began to heal, he was discharged and admitted to TIRR Memorial Hermann, where he spent one week undergoing round-the-clock, inpatient rehabilitation to address his injuries.

“Sam came to TIRR Memorial Hermann battling mostly cognitive issues, due to his TBI,” said affiliated physician Matthew Lin, MD, clinical assistant professor of physical medicine and rehabilitation at McGovern Medical School at UTHealth Houston and attending physician in the Brain Injury Program at TIRR Memorial Hermann. “It was important to work on those things that required daily physical, occupational and speech therapy sessions to help him recover from the brain damage he sustained in the collision.”

Sam was able to walk out of TIRR Memorial Hermann after 1 week of rehabilitative care and was greeted with hugs and cheers from his family and therapy team.

Sam spent approximately 3 weeks in the program where he focused on speech, occupational and physical therapy.

“Sam’s TBI impacted his cognitive function, so we spent a great deal of his sessions working on the injuries that weren’t so obvious,” said his speech therapist, Veronica Garcia-Lechuga. “We worked on tasks to help ensure academic success such as note-taking skills, mock tests and PowerPoint presentations to address public speaking. Sam’s processing skills and memory greatly improved from his initial day in speech therapy.”

Exactly 3 months after the collision, Sam graduated from the Challenge Program and got to ring the bell to mark the beginning of a new chapter in his life.

“I am forever grateful for all the nurses, doctors and medical team that played a role in keeping me alive,” he said. “I’m also thankful for my therapy teams at TIRR, for inpatient and outpatient rehab and for working hard to get me back to where I could return to school and work.”

Today, Sam is working to finishing his senior year of high school. He looks forward to his prom, graduation and going off to college in the fall.