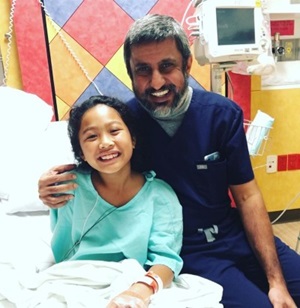 Not every patient invites her surgeon to go home with her, but that’s exactly what 10-year-old Sophia did following her surgery at Children’s Memorial Hermann Hospital. In her first post-surgery checkup, as her surgeon, Shiraz Younas, MD, demonstrated her post-operative exercises to her, the fourth-grader exclaimed, “I need to take you home with me!” according to Sophia’s mom, Leanne, a registered nurse, who says that while Sophia has always been petite in stature, her daughter has never been shy.

When Sophia was 6 or 7, her knees started to bow. At around age 8, she began experiencing knee and ankle pain. That’s when Leanne took her to see Dr. Younas, a pediatric orthopedic and scoliosis surgeon affiliated with Children’s Memorial Hermann Hospital and an associate professor in the Department of Orthopedic Surgery at McGovern Medical School at UTHealth. Dr. Younas diagnosed Sophia with bowed legs.

According to Dr. Younas, bowed legs (also known as genu varum) is a common condition among infants. But the condition typically resolves itself by age 2. 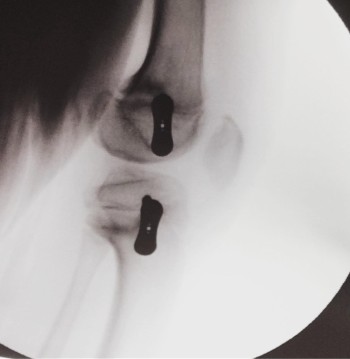 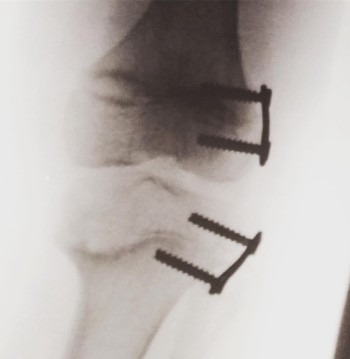 Dr. Younas conducted physical examinations and took standing X-rays to quantify the deformity and to determine which bones were contributing to Sophia’s condition. “Based on the results,we determined that Sophia’s bowing was caused by an abnormality in the growth plates in her knees, at the lower end of her femurs (her thigh bones) and the upper end of her tibias (the large bones in the lower front portion of the legs),” Dr. Younas says. “The part of the growth plates on the inside of her legs and knees were not contributing as much to her longitudinal growth as were the growth plates on the outside of her legs, putting asymmetric pressure across her knee joints, causing her legs to bow and contributing to her pain.”

Sophia’s deformity worsened as she got older. “When I first saw Sophia, her deformity was mild,” says Dr. Younas, “But by the time she turned 10, it had become more pronounced and would likely worsen as she grew and added more weight to the already stunted inner part of the growth plates.” 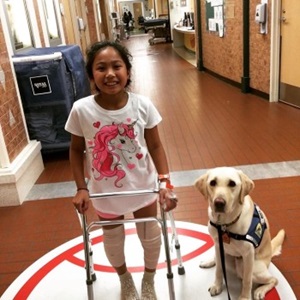 During the procedure, Dr. Younas spanned the growth plates on the outer sides of Sophia’s knees with metal plates, affixed with screws, which will allow her own growth to correct the deformity. When the deformity is corrected, another surgery will be performed to remove the metal plates and screws.

Sophia spent one night in the hospital following her procedure. Leanne says the nurses and staff, including the hospital’s Child Life specialists, took excellent care of her daughter. “As a nurse, being on the other side with my own child was an eye-opening experience. I admit, I cried,” she says. “But everyone, including Dr. Younas, was so caring and friendly. Shortly after surgery, Sophia took her first walk down the hospital hall with Children’s Memorial Hermann’s facility dog, Dexter, and that really cheered her up.”

Sophia is making good progress in her recovery. Dr. Younas will continue to monitor her progress, taking X-rays every three months. This will help determine her readiness for removal of the temporary plates and screws, likely in a year or two.

In the meantime, Leanne will need to figure out what to do about Sophia’s request for her own Dexter.