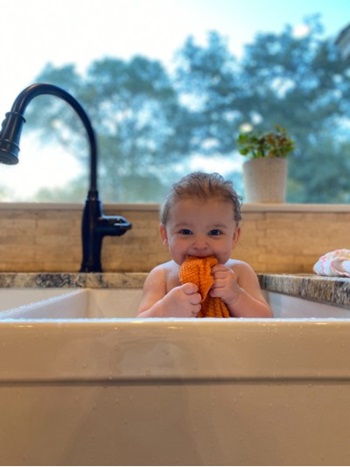 On November 23, 2019, she and her husband, Jeff, traveled to a community hospital in Tomball, Texas, for a planned delivery. Her doctor was inducing labor. Her baby was getting too large. It was time.

While her pregnancy had gone smoothly, her delivery was challenging. “The doctors began inducing labor that evening, and by the next morning, I was in fullblown labor but had not even begun to dilate. When the baby’s vitals started moving out of the normal range, doctors performed an emergency C-section. And right away, I could tell from everyone’s face that something was wrong,” she says, her voice quivering. “Then they pulled the baby out, and he was blue.”

Diagnosed with a Rare Heart Defect

Pediatric cardiologist Arpan Doshi, MD, affiliated with Memorial Hermann, reviewed the baby’s test results and diagnosed the baby with Ebstein anomaly, a rare congenital heart defect in which the tricuspid valve, the valve between the upper right chamber (right atrium) and the lower right chamber (right ventricle), isn’t formed properly, allowing blood to leak back into the right atrium. The most severe cases can result in heart failure, or even death. Often the cause is unknown.

Having just given birth, Kemberlee had to stay behind. Jeff went to Kemberlee’s mother’s home to explain to their two daughters, Auden, 11, and Klara, 4, that their baby brother wouldn’t be coming home for Thanksgiving after all, then headed to Children’s Memorial Hermann Hospital.

Born with Half a Heart

For the next few days, Walter clung to life, experiencing bouts of arrhythmia, or irregular heartbeat. As Dr. Salazar explains, “The arrhythmia was a symptom of Walter’s underlying condition.

Babies with Ebstein anomaly are essentially born with half a functioning heart. We knew if we didn’t correct the fundamental problem, his heart would likely fail.”

Fortunately, the heart specialists at the Institute are experienced in treating even the most complex and severe heart conditions. “The traditional approach has been to accept that these kids have to live with half a heart,” says Dr. Salazar. “But the long-term consequences of that are quite significant in terms of quality and length of life. One of the purposes of our program is to get the message out worldwide that there is an alternative—that whenever possible, we should give these kids a normal heart and avoid the single-ventricle or half-the-heart pathway.” 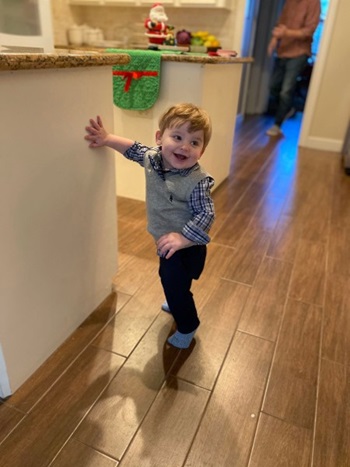 On December 9, 2019, Dr. Salazar and his team performed surgery on Walter’s heart, repairing the valve and removing a portion of the right atrium, which he says was abnormally large and dilated, alleviating the arrhythmia. The procedure was a success, and Walter’s prognosis is excellent.

By not settling for a suboptimal outcome, Dr. Salazar’s team was able to give Walter a wholly functioning heart and the chance to live a long, full life. “Walter is an example of the team believing, having faith and looking for the solution as opposed to accepting defeat,” says Dr. Salazar. “And that team includes Walter’s family, who wanted what was best for their child. We all wanted the same thing—to give Walter the best life possible.”

‘In the Very Best Care’

The Burgerts recently celebrated Walter’s first birthday. “He’s the happiest kid I have ever seen,” says Kemberlee. “He is always smiling and laughing. He is truly a joy in every way. We are so tremendously thankful, humbled and blessed. Walter ended up exactly where he needed to be, in the very best care.”