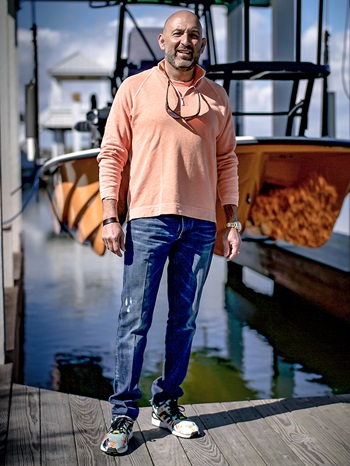 “I was a runner. I was active. I didn’t drink, didn’t smoke. I thought I was healthy as a horse,” Oscar Botello recalls. “Then one day, my son found me bent over in the kitchen grabbing my chest and my wife rushed me to the hospital.”

“Not only was Oscar’s heart attack a severe one, but it put his body in a state of shock that was worsened by a serious condition called acute stent thrombosis,” cardiologist Marwan Jumean, MD, explains. “When stent thrombosis occurs, a new clot forms in the stent, essentially blocking blood flow again to the heart muscle. And when this happens, patients usually have a 50 percent survival rate.”

The team rushed Oscar to the heart catheterization lab to clear the blockages in the stent. But scar tissue from the heart attack had begun to form on his heart and he developed life-threatening arrhythmias called a ventricular tachycardia storm, basically, a severe electrical storm in his heart.

“It was almost like an electrical short-circuiting of his heart, causing him to have cardiac arrest after arrest after arrest,” says Saumya Sharma, MD, assistant professor of cardiac electrophysiology at McGovern Medical School at UTHealth.

“At the Center for Advanced Heart Failure at Memorial Hermann Heart & Vascular Institute, our team is well versed in the latest research on medications and advanced therapies to repair the heart. For Oscar, the procedures and medications worked well together, and we were able to take him off the transplant list,” says Dr. Jumean, assistant professor for the Department of Advanced Heart Failure at McGovern Medical School.

After several months, Oscar left the hospital, 50 pounds lighter and unable to walk on his own without assistance due to neuropathy. “We created a plan to get him out of the wheelchair and ultimately walking independently,” said Trevor Watson, Oscar’s physical therapist at TIRR Memorial Hermann-The Woodlands. The physical therapy, combined with at-home exercises and his own positive spirit, helped Oscar walk on his own again and eventually return to some of his hobbies, like jogging, cycling, fishing and golfing.

“The physicians, the nurses, they were all awesome,” Oscar says. “Even when I was bedridden and had tubes everywhere, they made me feel like a person. I owe my life to them.”