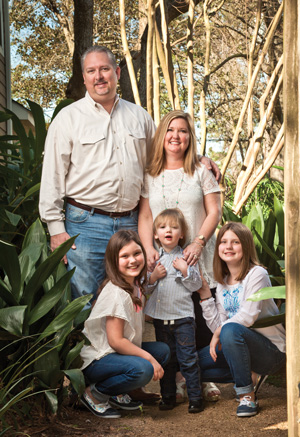 As fall of 2011 approached, Jennifer Sailors was 40 years old and in the prime of her life. The vice president of group management for AIG Valic, she lived in Garden Oaks with Chris, her husband, and two daughters, 7-year-old Ella and 5-year-old Storey. Between working and having a family, Jennifer was busy, but she was used to that. Then one day, she realized she was feeling run-down.

“I thought, gosh I’m really tired,” she remembers. “I was doing a lot of traveling for work, and I thought, maybe I need to start working out, or taking a vitamin or something.” She ended up paying a visit to her OB/GYN, Dr. Catherine Gabel, who is affiliated with Children’s Memorial Hermann Hospital. “And it turns out I did need a vitamin,” Jennifer says. She was pregnant.

A third baby hadn’t been off the table for the family. “We hadn’t ruled out the possibility,” says Jennifer, “but we certainly hadn’t been actively talking about it either. In fact, I gave my crib to people I thought would certainly need it more than I ever would again.”

But her lack of a crib was the least of her anxieties in those early days of her pregnancy. Jennifer remembers thinking, “How different is this going to be at 40 versus 32 and 34? Will I be able to keep up? How might it impact the girls?”

Given how unusual pregnancy is at her age, Jennifer’s feelings were natural. “It’s not very common,” explains Dr. Sean Blackwell, Chief of Women’s Services at Children’s Memorial Hermann Hospital and Professor and Chair of Obstetrics and Gynecology at McGovern Medical School at UTHealth. “Approximately 15 percent of pregnancies occur in women over 35,” he says. “After 40, it’s even less common, with a rate of less than 3 percent, although that’s increasing as more women delay marriage and kids, have second marriages and, of course, undergo fertility treatment.“

In addition, says Dr. Blackwell, “As women get older, they are more likely to develop conditions such as diabetes, hypertension or other medical disorders which have traditionally affected fertility or caused pregnancy losses. Now, our medical care is so much better, which allows women in their 40s to have successful pregnancies.”

After Jennifer learned she was pregnant, she began to feel nervous about having an amniocentesis procedure to make sure her baby was in good health.

She knew it was common in cases like hers, but that didn’t decrease her dread. “The whole idea of having an amnio was very frightening to me because I’m phobic about needles,” says Jennifer. “I don’t know how I’ve had three children,” she adds with a laugh.

When the day of the procedure arrived, “Dr. Gabel was fantastic,” Jennifer recalls. “She told me I had nothing to worry about. She assured me I would come back and say, ‘You were right, it was no big deal,’ and she was right.” The Sailors shifted gears, telling their two girls they had a sibling on the way: a brother. “Our focus turned to how, well, great this is,” she says with a smile.

Did you know? A woman’s fertility begins to decline at age 32.

Of course, Jennifer still had the rest of her pregnancy to navigate. On any pregnant woman’s list of concerns are gestational diabetes and high blood pressure, both of which increase the possibility of birth defects and miscarriage – and both of which become more common with age.

Dr. Blackwell recommends women in their 40s consult their doctors before planning pregnancy. “The reason that’s important is to make sure that your health is optimized,” he says, “because once you’re pregnant there are certain things you can and can’t change,” like losing weight. Counseling is important, too. “One of the hardest parts is that if you’re over 40, you’re probably more aware of all the things that can go wrong than you are when you’re much younger. I think the stress level just goes way up.”

Of course, sometimes things happen the other way around. In Jennifer’s case, her doctors simply monitored her closely throughout the pregnancy. She did develop high blood pressure after her pregnancy – which was not completely unexpected, considering the same thing happened with her daughters – and was put on medication for that. And when she started gaining weight a bit too quickly, her doctor reined her in. “I hadn’t thought about it,” she says, “but at the time I was craving a lot of bagels and things. I cut back on carbs, and that remedied the situation.”

Ultimately, Jennifer says, the experience wasn’t that different from the first two times around. “I was surprised and excited by how normal it seemed to be,” she says, “because you certainly hear horror stories. Thankfully that wasn’t my experience.”

Still, in the months leading up to Jennifer’s delivery, she was glad she would be giving birth at Children’s Memorial Hermann Hospital, where more than 4,500 babies, many from high-risk pregnancies, are delivered each year. “The great thing about it is that it’s a children’s and a women’s hospital in the middle of an adult hospital,” says Dr. Blackwell. “If someone gets really sick, we have ready access to the rest of the hospital and all its resources. It’s the safest place I know to have a high-risk pregnancy.”

Did you know? Multiple pregnancy rates are higher in older women.

The family went about getting ready, reshuffling the bedrooms in their home to make room for the new arrival and gathering all the clothing and gear they’d once owned but had given away. Then, before the expected day arrived, Jennifer’s water broke in the wee hours of Easter Sunday. “I remember calling my mom and saying, ‘I think that we need to go to the hospital, and I need you to come take care of the girls,’” she says. It was Dr. Gabel’s husband, Dr. Paul Cook, also an OB/GYN affiliated with Children’s Memorial Hermann Hospital and present for Jennifer’s previous births as well, who attended to the holiday delivery of a healthy baby boy. The family named him Walker.

“I didn’t want to miss a second of it,” says Jennifer, who took three months off from work to be with her new son. As for her job, “I’d been through two other pregnancies with the exact same team intact. It gave me more credit than some other people might have in a brand-new job. I was already into my career. I wasn’t necessarily having to prove anything at that point. It was a great decision.”

Caring for baby Walker, Jennifer realized she’d learned a few things the first two times around. She brought a “more mature perspective” to motherhood, she says. “Having gone through it with two girls, you realize you might make some mistakes but it will turn out OK.” Having two older girls who wanted to help out didn’t hurt, either.

Today, can Jennifer imagine life without now-3-year-old Walker? “No,” she says. “It’s crazy how, no, I can’t. He just seems to complete the whole family. It’s just been a ton of fun.”