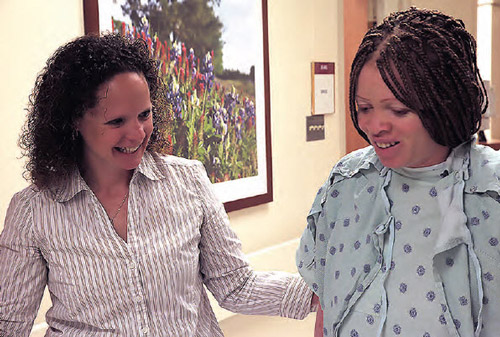 McGovern Medical School at University of Texas Health Sciences Center (UTHealth), in collaboration with Memorial Hermann-Texas Medical Center, is proud to announce that the UTHealth Mobile Stroke Unit has successfully transported and helped save the life of its very first patient.

The unit, the first and only one of its kind in the nation, is a specially equipped ambulance with a CT (computed tomography) scanner that allows a stroke unit team member to quickly assess whether a patient is having a stroke caused by a blood clot. If so, the unit is equipped to administer the clot-dissolving drug tPA (tissue plasminogen activator).

Shortly after becoming fully licensed and ready to go live last May, the unit was dispatched for the very first time to 30-year-old Maureen Osaka’s home near downtown Houston after 911 received a call from Osaka’s friend that the woman was suffering from stroke-like symptoms.

“I felt so weak, I couldn’t use my hand and I was so dizzy,” said Osaka. “I couldn’t stand up so I started crawling from the living room to my bedroom, thinking I was going to lie down and go to sleep to hopefully feel better – I didn’t know what was going on. But before I could make it to my room, the whole left side of my body stopped working and I could no longer see. So, I made it to the phone and blindly started dialing the only numbers I knew.”

Upon arrival, the mobile stroke unit team assessed Osaka then moved her into the ambulance where they immediately started the CT scan. Within minutes, they were able to confirm Osaka was not only suffering a stroke but probably had one of the rarest and most fatal types of stroke, a basilar artery occlusion, which means the blood clot was blocking an artery that provides blood to the brain stem.

Having the critical information they needed from the scan, the team was able to begin administering tPA treatment onsite, before the ambulance even left the scene for the Comprehensive Stroke Center at the Memorial Hermann Mischer Neuroscience Institute at Memorial Hermann-Texas Medical Center (TMC). “The type of stroke that Ms. Osaka suffered is often difficult to diagnose. So in addition to speeding treatment, the Mobile Stroke Unit brings specialized stroke expertise right to the patient’s home at a time when it is needed most,” said James C. Grotta, MD, the neurologist who led the team that treated Osaka that day.

“tPA is the only FDA-approved treatment for an ischemic stroke, but it must be given within three hours of the first signs of stroke to be most effective,” added Dr. Grotta. He is also the director of stroke research in the Clinical Institute for Research & Innovation at Memorial Hermann-TMC and director of the mobile stroke unit consortium that will also include the stroke teams from Houston Methodist Hospital and St. Luke’s Medical Center, local businesses and philanthropists. “It typically takes an hour once a stroke patient arrives in the emergency room to receive treatment, and that’s not counting transport time. In these situations, every minute – every second – counts. So, the earlier the clinical team can intervene, the better the outcome.”

“Ms. Osaka was treated approximately 78 minutes after she first felt sick. Fewer than 1 percent of all stroke patients are treated that quickly. When she first arrived at the Memorial Hermann-TMC Emergency Center, her basilar artery was still blocked, but by the time the team got her up to the endovascular suite to try to extract the clot, it had already largely dissolved,” said Dr. Grotta.

Mark Dannenbaum, MD, neurosurgeon affiliated with the Mischer Neuroscience Institute and associate professor in the department of Neurosurgery at McGovern Medical School, performed the endovascular procedure to remove the rest of the blood clot from her brain. Patients with an acute basilar artery occlusion, the type of stroke that Osaka suffered, typically have a mortality rate of greater than 85 percent. Those who survive are often left partially paralyzed or otherwise severely disabled, whether mentally, physically or both. Just days after her stroke, Osaka was moving her left side, speaking clearly and walking independently.

“I remember being in the ambulance on the way to the hospital and thinking I’d never be able to use my hand again. I’ll never talk again. I’d lost all hope,” said Osaka. “But, I can still talk! In just one day, I went from not being able to speak, to speaking but no one could understand me, to now speaking and pronouncing things perfectly. Before the end of that same day, I could also move my hand again. It was like a dream! I could even stand up and walk!”

“Now that we quite literally have a mobile emergency room in the ambulance, we are able to assess and treat the patient faster than ever before possible,” said Stephanie Parker, RN, BSN, project manager for the UTHealth Mobile Stroke Unit. “Because we were able to arrive so quickly and initiate tPA treatment on scene, we may have not only saved Ms. Osaka’s life, but by cutting down on precious time, we were able to help save millions of her brain cells and minimize any residual disability as well.”

Osaka, who is originally from Nigeria but travels the world doing philanthropic work, feels blessed and thankful that she happened to be in Houston and within the unit’s response radius when her stroke occurred.

A stroke occurs when blood flow to the brain is interrupted by a blockage or a rupture in an artery, depriving brain tissue of oxygen. It is the fourth leading cause of death in the United States and a leading cause of disability. According to the American Stroke Association and the Centers for Disease Control, nearly 800,000 Americans suffer a stroke each year, or one every 40 seconds. The most common symptoms include weakness or numbness of the face or arm, or difficulty speaking.

After observing a similar unit in Germany in March of 2014, Dr. Grotta was inspired to bring a mobile stroke unit to Houston to further improve upon the quality of nationally recognized stroke care already delivered at Memorial Hermann-TMC and McGovern Medical School. He presented the idea to the UTHealth Development Board and partnered with Frazer Ltd., a third generation, family-run Houston company that builds emergency vehicles. Then, thanks to many generous donations totaling over $1 million, the mobile stroke unit became a reality and was officially unveiled in February 2014.

One of the project’s generous donors is local legend Jim “Mattress Mack” McIngvale, owner and operator of Gallery Furniture. “I donated to the UTHealth Mobile Stroke Unit partly because I’m so grateful to Dr. Grotta for all his help with my many strokes over the years, and also because I wanted to support the important research he’s doing for stroke care,” said McIngvale. “I’m thrilled to hear of the positive outcome for the first stroke unit patient and hope that we will see many more of these outcomes as the team continues its groundbreaking work. This is a priceless and lifesaving service Dr. Grotta and his team are providing the Houston community, and it was an honor to be able to contribute to such a cause that is so close to my heart.”

The mobile stroke unit is run in conjunction with the Emergency Medical Services of the Houston Fire Department, Bellaire Fire Department and West University Fire Department. It carries a paramedic, neurologist, nurse and CT technician and currently runs alternate weeks as part of a clinical trial expected to last three years. The trial includes incorporation of the telemedicine program at McGovern Medical School and Mischer Neuroscience Institute. Researchers are looking at whether the telemedicine program, which physicians across the state use to consult with stroke experts affiliated with Memorial Hermann-TMC, can be applied to the mobile stroke unit. If so, the unit might be able to respond to calls in the future using telemedicine, which could make it more cost effective.