When Natalie’s unborn baby daughter, Mila Grace, was diagnosed with spina bifida in utero, Natalie and her husband, Kevin, were stunned. After a routine ultrasound done just a week earlier, her obstetrician suspected that one of Mila Grace’s feet was clubbed and referred Natalie to a maternal-fetal medicine specialist. The specialist diagnosed spina bifida and scheduled an appointment for her at The Fetal Center at Children’s Memorial Hermann Hospital. In 2011, The Fetal Center’s accomplished team of affiliated specialists was the first in Texas to perform open fetal surgery for the repair of spina bifida – surgery performed before birth aimed to reduce the risk of complications associated with spina bifida and improve long-term outcomes for the child. 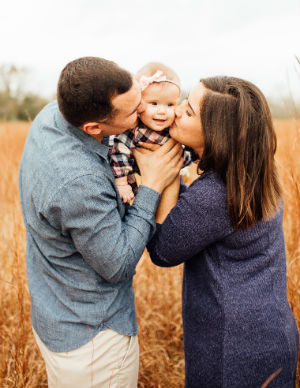 Before Natalie’s appointment at The Fetal Center, she found support groups on Facebook and learned as much as she could from other mothers whose children have spina bifida. Like all patients referred to The Fetal Center, she and Kevin underwent extensive counseling with the multidisciplinary team. In the span of two-and-a-half days in April 2017, they met with specialists in maternal-fetal medicine, pediatric surgery, pediatric neurosurgery, fetal cardiology, genetic counseling, long-term spina bifida outcomes, neonatology, nephrology, adult and pediatric anesthesiology, social work and Child Life Services. The team carefully evaluated mother and baby as potential candidates for open fetal repair, considering the risks and benefits to both Mila Grace and Natalie.

“It’s quite an exhaustive two to three days for parents,” says Mary Austin, MD, MPH, a specialist in pediatric surgery and pediatric surgical critical care and an assistant professor in the department of Pediatric Surgery at McGovern Medical School at UTHealth Houston. “Our team is in constant communication about mom and baby from the very first meeting. When the evaluation is complete, we hold a multidisciplinary conference and decide as a group whether mom and baby are candidates for open fetal repair based on the criteria set forth by the MOMS Trial. Natalie and her baby met all the clinical qualifications.”

Natalie and Kevin went into the evaluation believing that if they qualified, there was a reason. “We put our trust and faith in God and the doctors,” she says. “We knew we were in the very best place we could have been. The team was impressive – we had complete confidence in them.” 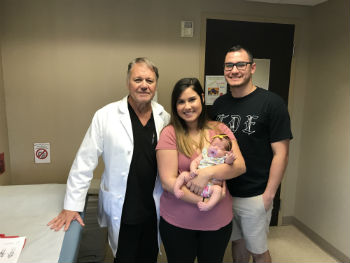 Traditionally, babies with spina bifida have surgery shortly after birth to repair the spinal defect. They may also need procedures to treat other complications, such as hydrocephalus (a buildup of fluid on the brain). Children with moderate to severe spina bifida have lifelong disabilities, including difficulty or even inability to walk, lack of bowel and bladder control, and learning disabilities. Today, repairing the defect before birth through maternal-fetal surgery is considered an effective treatment option to reduce the risk of these complications and improve outcomes in babies who qualify.

Natalie was 25 weeks and two days’ pregnant when she and her unborn baby underwent fetal intervention for spina bifida at Children’s Memorial Hermann Hospital. Dr. Austin and The Fetal Center team opened Natalie’s uterus and positioned the baby to expose the defect for repair.

Neurosurgeon Stephen Fletcher, DO, an associate professor in the division of Pediatric Neurosurgery at McGovern Medical School, closed the defect using a patch. Then, Drs. Austin and The Fetal Center team closed Natalie’s abdomen, and she was moved to the hospital’s prenatal floor.

Dr. Fletcher was involved again when Mila Grace was born. “We encourage patients who have the fetal intervention surgery at Children’s Memorial Hermann Hospital to deliver their babies here,” he says. “We check to make sure there are no problems with the repair. In addition to the concerns we have about the fetal surgery itself, the risks include premature labor and delivery of the baby. The goal is to deliver at around 37 weeks.”

Mila Grace was born prematurely at 36 weeks on July 14, 2017. “She went straight to the hospital’s Level IV Neonatal Intensive Care Unit (NICU), where she stayed for the next five weeks,” Natalie says. “She didn’t require respiratory support and could take breast milk from a bottle right away. She had to stay on her belly for five weeks to allow the skin to grow over the patch and heal, but she had full movement and feeling in her legs and toes and no bowel or bladder dysfunction. She had no leaks from the patch, and the hydrocephalus was stable. We were very blessed.” 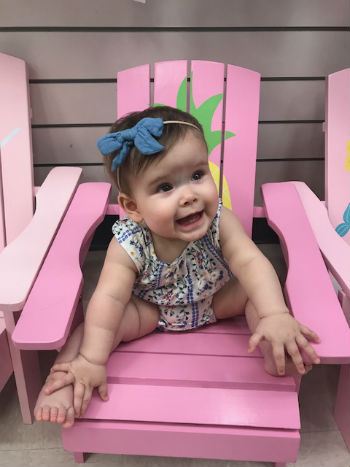 Last year, Mila Grace had orthopedic surgery for her clubbed feet – a tendon release from which she recovered quickly. She sees a physical therapist twice a week, and at eight months, she started crawling backwards and sitting up.

“She laughs like crazy, so we call her the little smile monster,” Natalie says. “Kevin and I expected the worst, including paralysis and developmental delays, but she’s essentially a typical baby for her age. We’re so thankful she had the surgery.”

On April 27, 2018, the couple, their family and friends celebrated the anniversary of Mila Grace’s first “birth” – the fetal surgery. “Some of the moms refer to their fetal surgery anniversaries as Butt Day, because the babies’ butts are born to repair the lesion, so we got a bundt cake as a play on words,” Natalie says.

The same day, she contacted The Fetal Center through the Contact Us link and sent a current photo of Mila Grace. “It’s been a year since we met you all, WOW! We are forever grateful for everything you did for us.”