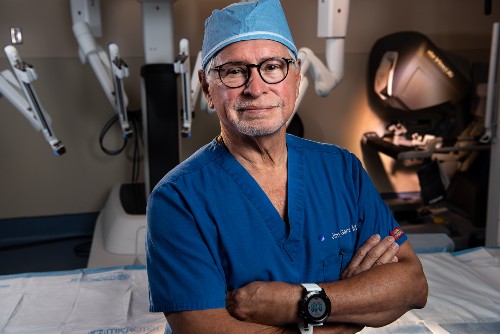 Looking back, Michael wonders why he waited so long to have his abdominal hernia repaired. An avid hiker and hunter, the 60-year-old Houstonian somehow managed to work around it—for 10 years. “It wasn’t particularly painful, but after being on my feet all day hiking or hunting, it felt like if someone were to hit me in the stomach, my stomach would explode,” he says.

Ironically, it was a doctor’s appointment for his son, not for himself, that motivated Michael to finally do something about his hernia. “I took my 20-year-old son to see Dr. Garza about his hernia, which was causing him stomach pain, and I happened to mention to Dr. Garza that I had a longstanding issue of my own. I made an appointment to see him the next day,” says Michael.

Hernias Can Become Larger Over Time

As Dr. Garza explains, “A hernia is a weakness or tear in the abdominal muscles that allows fatty tissue or an organ such as the intestines to protrude through the muscle tissue. Hernias most often occur in or around the groin, abdomen and navel or near previous sites of abdominal surgery. Michael had what is known as an epigastric hernia, a protrusion in the abdominal wall above the navel, which began as a weakness in the abdominal wall and through daily activity and exertion became larger over time.”

Dr. Garza says a hernia will generally increase in size and become more painful and, if left untreated, can lead to more serious, life-threatening complications.

Minimal Recovery Time with Little or No Pain

Michael says one reason he kept putting it off was because he thought it would be a “big, expensive surgery.” But as Dr. Garza explained to him, most hernia repairs are covered by insurance, and recent advances in surgical techniques, including robotic laparoscopic hernia repair, enable surgeons to repair hernias in an outpatient setting with minimal recovery time. “Using robotic laparoscopic hernia repair, I can repair large complicated hernias through tiny incisions. My patients typically go home within 24 hours after their procedures and can resume their normal activities within a few days.” he says.

Dr. Garza also attributes patients’ short recovery times to advances in pain management. “The majority of my patients do not require narcotics after surgery. They use over-the-counter pain relievers before and after surgery, and we administer a new pain controlling medication at the start of surgery, which lasts four days. This regimen allows the patient to avoid the severe early postoperative pain that can slow recovery,” he says. Dr. Garza has completed more than 500 robotic assisted surgeries at Memorial Hermann Memorial City.

Michael says his surgery experience at Memorial Hermann Memorial City Medical Center was seamless. “Dr. Garza explained everything that was going to happen. I went in for the surgery in the morning, and a few hours later, I was up and out of there. He and everyone there were excellent. I followed Dr. Garza’s instructions and stayed ahead of my pain. I didn’t need narcotics,” he says.

Back to Doing What He Loves

Five months post-surgery, Michael is back to hiking, hunting and working out and says he feels great. “Once the hernia was gone and I began working out again, I realized how weak my core was, which had caused some back pain. Now my core is stronger, and I feel great. It was amazing how quick the recovery was. I have already recommended Dr. Garza to several of my friends,” he says.

To learn more about hernia repair, or to schedule an appointment with a hernia specialist, visit our hernia condition page.