On New Year’s Eve 2012 Brendan Diffley’s father, Shane Diffley, and his stepmother, Jennifer Diffley, drove the 12-year-old to nearby Memorial Hermann Katy Hospital after he shot himself in the eye with a pencil while fashioning a makeshift paper crossbow using online directions. He was transferred to Memorial Hermann-Texas Medical Center, where cornea and external disease specialist Gene Kim, MD, was on call for ophthalmic trauma. 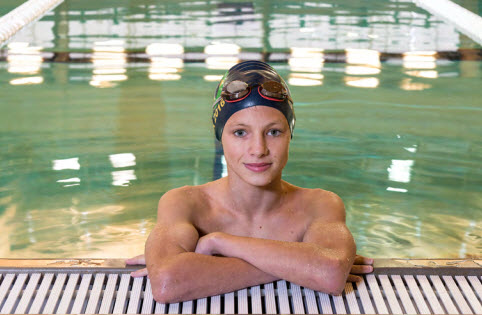 “The front of Brendan’s eye was splayed open and bleeding, with an L-shaped cut in the cornea,” says Dr. Kim, a clinical assistant professor in the Ruiz Department of Ophthalmology and Visual Science at UTHealth Medical School. “We rushed him to the OR.”

In the hospital’s first surgery of 2013, Dr. Kim closed the open globe injury with eight sutures and re-inflated the eye using balanced salt solution. Brendan went home with his mother, Kathy Perry, on the day of surgery, wearing a patch over his eye.

While he recovered well, the aftermath of the injury left Brendan with scars on his cornea, an irregular astigmatism that could not be corrected with glasses or soft contacts, and a traumatic cataract.

“Repairing a lacerated cornea is like putting the pieces of a puzzle together: it’s never going to be as smooth as it was originally,” Dr. Kim says. “We were able to put it back together neatly, but where there were sutures, he had astigmatism. Because his astigmatism was perfectly aligned, when we removed the cataract six months after the initial surgery, we were able to implant an intraocular toric lens to correct the astigmatism.”

Dr. Kim says he recognizes that implanting a toric lens in trauma cases is considered risky. “I debated it for a long time, but given Brendan’s active lifestyle and low likelihood of tolerating a contact lens, I decided to place the special toric lens inside the eye. We performed meticulous surgery to get around some of the internal scarring and also had some luck. I’ve had a lot of experience doing trauma and complicated cases. The more experience you have, the better feel you have of what will work. I was fortunate to be right in Brendan’s case.”

Over a year and a half, Brendan went from having a badly cut cornea and collapsed eyeball to 20/30 vision without correction. “He has a bit of scar tissue on the capsule holding his intraocular lens, which causes slight distortion in his vision, but we can correct that in a five-minute laser procedure to remove the opacified tissue. He was very lucky that most of his injuries were to the front half of his eyeball. When injuries affect the back half, there’s very little we can do to save the eye.”

A talented athlete, Brendan rides dirt bikes and is an avid water skier and year-round swimmer who competes in triathlons. “When he first had the surgery, he couldn’t even see the big E on the eye chart,” his mother says. “But that was just the beginning, and his eye healed well. Dr. Kim is an incredible surgeon. We were blessed to have him. They do amazing things to save eyes these days.”

Thank you for contacting Memorial Hermann-Texas Medical Center. We have received your inquiry, and a team member will contact you soon.