Freddy and Bernarda: A Match Through Kidney Paired Donation 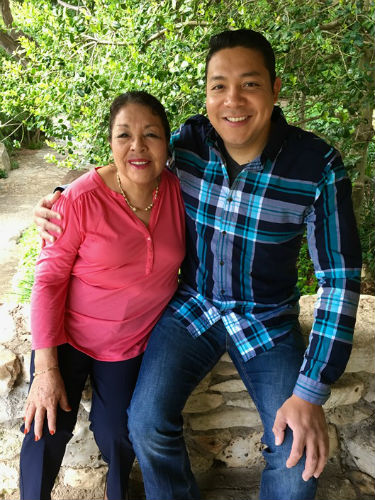 Bernarda learned she had kidney problems about nine years ago, when she was 56. “It caught us all by surprise,” says her son Freddy, who lives in Austin, Texas. “All of a sudden she got really sick, and her doctors at the hospital down in McAllen told us she would need dialysis. At that moment, none of us in the family had any idea what dialysis was. When we learned that she would need it to stay alive and would eventually need a kidney, it was a shock. Later we found out that high blood pressure runs in our family, and that hers led to kidney failure.”

Freddy, who is 34, and his three brothers, ages 33, 36 and 37, investigated the possibility of donating a kidney directly to their mother at a transplant center in McAllen, Texas. When lab work showed that none of the brothers was a match, the transplant coordinator put Bernarda’s name on the United Network for Organ Sharing (UNOS) kidney transplant waiting list. At the time, more than 100,000 people had failing kidneys; of these, about 60,000 were on the waiting list for a transplant.

“My mother was on dialysis for eight or nine years and we were trying not to lose faith in the deceased donor transplant process, but she was getting older,” Freddy says. “So we started looking at ways to be more proactive.”

Their search led them to the Kidney Transplant Program at the Memorial Hermann Transplant Center in Houston, where they learned that Bernarda had a high number of circulating donor-specific antibodies targeting human leukocyte antigen (HLA). The condition is associated with a higher risk of kidney transplant rejection.

“With the help of the great transplant coordinators at Memorial Hermann, we learned that there was less than a 5 percent chance of finding a match because of her antibodies,” Freddy says. “I went through the lab work again just to be certain, and when they confirmed that I wasn’t compatible, they gave us information about kidney paired donation. I wanted to donate my own kidney through the program so that my mother could receive one. I liked the idea of helping her and at the same time helping another family.”

Kidney paired donation uses software that sorts through many of the variables involved in a kidney transplant, including blood type and HLA crossmatch, a sort of mini test transplant performed in a laboratory. By using the software and working together, several transplant centers around the country have been able to match three or more donor-recipient pairs, offering patients the benefits of living kidney donation with significantly less wait time and better average survival of the kidney than deceased donor transplantation.

It took more than a year to find a match for Bernarda through kidney paired donation. “We never lost faith,” Freddy says. “In the end they were able to match my mother to a donor in Texas and I was a match for a woman from Wisconsin – a lady about the same age as my mother who had been on dialysis for eight years. That was something very big for me, that her story was similar to my mother’s. So it was my family, a family in Texas and a family in Wisconsin. Everyone had surgery on the same day in 2014.”

Freddy was up walking the halls of Memorial Hermann-Texas Medical Center the evening after his laparoscopic procedure. “It was a pretty easy recovery for me,” he says. “I was able to visit my mother the next day. We hugged and talked about how very blessed we felt.”

He was discharged after a three-day stay and returned to normal activity two weeks later. By the end of January, a little more than a month after the surgery, he was back to jogging and practicing with his amateur soccer team, ATX United.

“My mother took a little longer to recover,” Freddy says. “She left the hospital three days after the surgery, and we stayed in Houston for a few weeks so we could attend her follow-up visits conveniently. She feels blessed to have a higher quality of life and is happy that she can travel more now to visit family and spend time with her grandchildren. She takes daily walks around the neighborhood and sometimes attends Zumba classes. She believes that support is extremely important so she continues to visit her friends who are still undergoing dialysis.

“Our experience with the whole process was quite amazing,” he says. “From the first day we walked into the Memorial Hermann Transplant Center, we knew it was the right place for us. We all agreed and felt very comfortable with everyone there. That was an important thing for us. We had a big celebration with family and friends on the first anniversary of her transplant. We did a big prayer and gave thanks to God for giving us a miracle.”

Kidney Transplant Transplant Request an Appointment or Refer a Patient