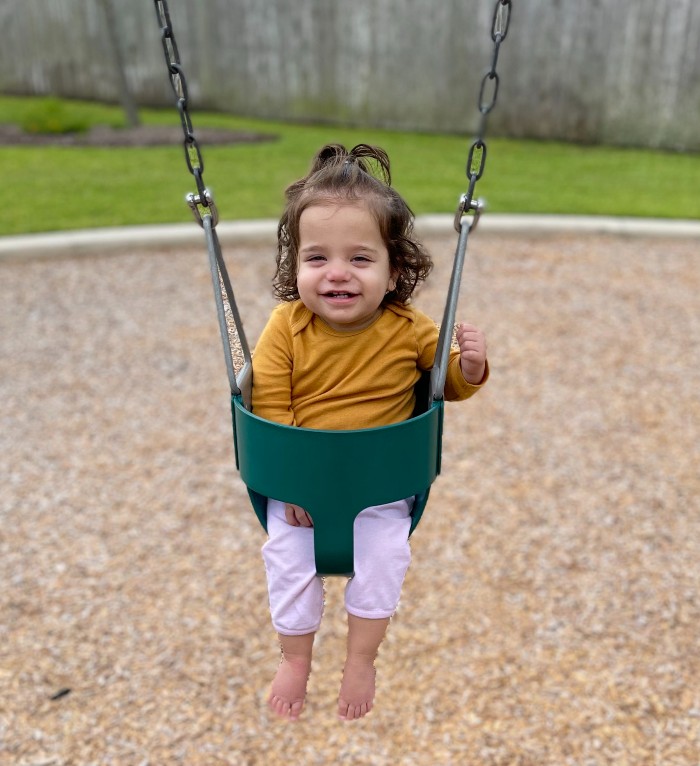 When 33-year-old Maggie Sharma got pregnant six months after her first son was born, she was so excited to welcome another child into her growing family. She assumed her second pregnancy would be similar to her first—full term, no complications and a relatively easy delivery. But during her 20-week anatomy scan—an ultrasound that includes an in-depth examination of the baby’s organs and overall development—Maggie’s doctor, Dr. Taryll Jenkins, discovered that she had a complication called placenta previa, a condition in which the placenta covers the opening of the cervix, usually preventing a vaginal delivery. Dr. Jenkins is affiliated with Memorial Hermann.

“My doctor and I decided together to monitor it and follow up with another scan in a few weeks,” Maggie said. “I was so nervous after I first learned about my diagnosis, so I started doing all of this research on my own, and that’s when I first came across The Fetal Center,” Maggie said. “I feel so blessed to live in a city where there are doctors who are world-renowned in the specific complication I had.”

When Maggie came back for another ultrasound, however, she learned that her placenta previa was most likely something even more serious—a condition called placenta accreta, in which the placenta grows too deeply into the uterine wall. Because of the severe complications that can arise from this condition, her OB-GYN referred Maggie to The Fetal Center at Children’s Memorial Hermann Hospital.

The Fetal Center is a highly specialized program and international leader in high-risk pregnancy complications, including fetal diagnosis, fetal intervention and comprehensive fetal care for infants with congenital anomalies or genetic abnormalities. In collaboration with pediatric subspecialists at McGovern Medical School at UTHealth Houston, the care team works closely with patients and their referring providers to create a comprehensive plan for each mother, including fetal interventions as well as coordinated plans for before, during and after birth.

During her countless hours of research about her condition, Maggie repeatedly ran across a certain name: Dr. Ramesha Papanna. She knew he was a leader in treating placenta accreta, and she was relieved when she was brought under his care for the remainder of her pregnancy. Dr. Ramesha Papanna is a maternal-fetal medicine specialist and professor in the Department of Obstetrics, Gynecology and Reproductive Sciences at McGovern Medical School who serves as co-director of The Fetal Center.

“He put me at ease and made sure I was monitored closely,” Maggie said. “Dr. Papanna and the whole team took the time to answer all of my questions and explain all of the risk factors that come with placenta accreta during delivery. I was very nervous, but they did everything they could to make me feel comfortable with the situation I was faced with. They really took care of both me and my baby, and I felt very educated and prepared every step of the way.”

“Placenta accreta can be a serious condition, and it is considered a high-risk pregnancy complication,” Dr. Papanna explained. “In a typical pregnancy, the placenta detaches from the uterine wall after childbirth, but in the case of placenta accreta, some of the placenta remains attached, which carries the risk of severe blood loss immediately after delivery. Once this condition is diagnosed and the degree of severity has been determined, the team takes a multidisciplinary approach to care for the patient to improve outcomes.”

Dr. Papanna followed Maggie closely to make sure there were no additional complications leading up to delivery. At 30 weeks, after some unexpected bleeding, the team wasted no time admitting her to the the Women’s Center at Children’s Memorial Hermann Hospital—a Level IV maternal facility, which denotes the highest level of care—for around-the-clock monitoring.

“He prepared the team in case I needed to deliver,” Maggie recalled. “Thankfully, I only had to stay in the hospital for a week.” After that, Maggie and her husband, who live in Katy, about an hour away from the hospital, moved into a hotel in the Texas Medical Center so that she could get to Children’s Memorial Hermann Hospital quickly in case she started bleeding again.

As part of her care plan, she had regular checkups with the affiliated, multidisciplinary team who specialize in high-risk pregnancies and work to optimize care for both mom and baby. As Maggie came upon the 33-week mark, her care team determined that she would need to deliver soon, for the sake of both her baby’s health and her own.

“Because of the risk of severe complications during delivery, women with placenta accreta often need to deliver a few weeks early and via C-section,” Dr. Papanna said. “This minimizes the risk of losing too much blood during delivery and allows specialists to have a detailed plan for the entire process. We want to have blood supply on hand should there be a need for a blood transfusion, as well as additional specialized surgeons standing by, since patients with this condition sometimes require a hysterectomy after the delivery.”

For patients with placenta accreta, a hysterectomy, which is the complete removal of the uterus, is often required to reduce blood loss.

The day before Maggie was scheduled to have her C-section, she was admitted to the Women’s Center at Children’s Memorial Hermann Hospital to prepare for her high-risk delivery. Her team of specialists inserted ports to expedite the process of giving her blood should she need a transfusion, and they went over everything she should expect in detail, as well as any complications that could arise and their plan for each possible scenario.

“I was terrified but I knew I was in the best hands,” Maggie said. “They told me that I could stay awake for the C-section, but they also walked me through potential complications, including the fact that they may need to put me under general anesthesia after the delivery.”

The affiliated maternal-fetal medicine physicians and care teams, as well as care providers from the blood bank, critical care, interventional radiology, nursing, OB anesthesia, adult trauma surgeons and more, are involved in each case of placenta accreta spectrum disorders. The teams are present at delivery and are involved in each patient’s journey, from initial consults to imaging and operating room logistics to post-operative intensive care support for both mother and baby.

The next morning, Maggie was full of mixed emotions—terrified of her high-risk delivery yet excited to finally meet her baby girl. She remembered the room being full of specialists, including multiple physicians and nurses from the Neonatal Intensive Care Unit (NICU) as well as a surgeon named Dr. Joseph Lucci, a UTHealth Houston OB-GYN and gynecological oncologist affiliated with Children’s Memorial Hermann Hospital, who specializes in complex conditions of the placenta and was prepared to perform an emergency hysterectomy if necessary. Dr.  Lucci serves as professor and director of gynecologic oncology in the Department of Obstetrics, Gynecology and Reproductive Sciences at McGovern Medical School. 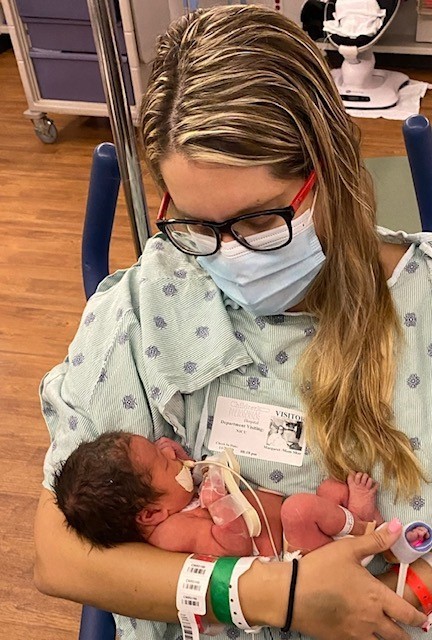 On November 20, 2020, Maggie delivered Mila, a healthy baby girl. Because she was born early, at 33 weeks, Mila was taken to the Level IV NICU at Children’s Memorial Hermann Hospital for monitoring, but Maggie was overjoyed to be awake and able to meet her in the moment. Shortly thereafter, however, Maggie started losing blood, and her blood pressure plummeted. Before she knew what was happening, a swarm of specialists surrounded her, working urgently to save her life.

“They put me under general anesthesia as soon as all of that started and made my husband leave the room,” Maggie said.

When Maggie finally woke up in the ICU, she learned that part of her placenta had ripped apart during delivery, an anticipated complication for patients with placenta accreta.

“We were prepared for this possibility and decided to perform an emergency hysterectomy as soon as we discovered what had happened,” Dr. Lucci said. “When the placenta grows into the wall of the uterus, the blood vessels of both become intertwined, so it is very difficult to separate the two without the potential for life-threatening blood loss. In cases like this, fully removing the uterus stems blood loss and leads to the best outcomes. Without the option of a hysterectomy, many women with placenta accreta would not survive their deliveries.”

Maggie later learned that she had to have a total of six blood transfusions that day to save her life. “I’m now the biggest advocate for donating blood, and I am so thankful that I delivered at Children’s Memorial Hermann Hospital, not only because my team of specialists was so prepared, but because there was never any question about whether they had enough blood on hand or if they had adequate resources for me or my baby,” she said.

Maggie was in the hospital for five days total, and Mila stayed in the NICU for less than three weeks before she was strong enough to come home. Today, the Sharma family is healthy and thriving.

“My daughter is a year and a half now, and she’s doing great,” Maggie said. “She’s caught up on all of her milestones, loves to eat, loves to laugh, and she can be feisty—she has a really big personality. She loves her brother, and he’s already very protective of her. It’s really sweet.”

Maggie said she will be forever grateful for the care team for safely delivering Mila and for saving her own life.

“Looking back, I feel so lucky,” Maggie said. “There are so many people who I talked to when I first learned about my condition who have actually travelled here to Houston to get this care from Dr. Papanna and the team. They saved my life.”