Forty-six-year-old Luis Perez was driving with a friend on a Saturday night in August 2015 when he felt a small pain and a sensation of pressure in his middle upper back. “While I was driving, I kept moving around, thinking I’d twisted wrong and pinched a nerve,” Perez says. “The pain kept getting worse and worse, until I was in tears. It hurt to breathe, so I held my breath as much as possible. We pulled into a gas station and called 911.” 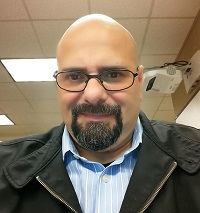 Perez was rushed to nearby Memorial Hermann Northeast Hospital and immediately transferred to the Memorial Hermann Heart & Vascular Institute-Texas Medical Center, home of one of the world’s largest aortic surgery practices. A CT scan revealed an aortic dissection in the back of his chest, where the descending thoracic aorta runs along the spine and meets the abdominal aorta at the level of the diaphragm. The tear continued downward past his kidney.

“Based on our diagnosis of acute uncomplicated Type B aortic dissection – with flow in the branch arteries and no rupture – we decided as a team to treat him medically with blood pressure control,” says Kristofer Charlton-Ouw, MD, FACS, director of the Vascular Laboratory at the Heart & Vascular Institute and an associate professor in the department of Cardiothoracic and Vascular Surgery at UTHealth’s McGovern Medical School. “His pain improved during the August hospitalization, but he came back later with persistent pain.”

Dr. Charlton-Ouw and other specialists affiliated with the Institute’s Aortic Center of Excellence are currently conducting research aimed at determining the best treatment – medical or surgical – for patients with uncomplicated Type B aortic dissections. The trial, “ACUTE-B: A Randomized, Controlled Comparative Study on the Effectiveness of Endovascular Repair Versus Best Medical Therapy for Acute Uncomplicated Type B Aortic Dissection,” will follow participants for a period of five years after initial presentation to record any major events such as rupture, aortic intervention or re-intervention, progression to complicated dissection, aneurysm formation, malperfusion resulting in organ failure or aorta-specific mortality. Dr. Charlton-Ouw is principal investigator of the single-center trial.

"There’s much discussion about thoracic endovascular aortic repair (TEVAR) in patients who are not considered to have a complicated Type B aortic dissection,” he says. “Studies show good early outcomes with blood pressure control in uncomplicated cases but an increasing risk of aortic enlargement and death over time. Even if it makes sense to reinforce the aorta with TEVAR, we don’t know if the risks of the procedure outweigh the benefits, and no one has assessed the clinical outcomes from the patient perspective. In focus group sessions, we learned that aortic dissection caused profound deterioration in quality of life and that it significantly influenced patient preferences for treatment. This is a strong area of interest for our entire group, and we’re in discussions with other institutions about expanding the study to a multicenter trial.”

Very specific medical criteria define complicated versus uncomplicated dissection. Participants in the trial with uncomplicated Type B aortic dissections will be randomized to TEVAR with stent graft versus medical management. “A percentage of patients who receive medical therapy return with rupture, aneurysms or other complications,” Dr. Charlton-Ouw says. “When Mr. Perez came back after discharge with persistent pain, it was a case of failure of medical therapy, so we performed TEVAR with stent graft in early December 2015. Part of his dissection was located at the origin of the left subclavian artery. During the surgery, I covered that artery intentionally because we couldn’t exclude it from the tear. Postoperatively he was fine, but later he had headaches and dizziness, which led us to suspect left subclavian steal syndrome. After an ultrasound confirmed our suspicion, we did a left-carotid-to-subclavian bypass toward the end of January, almost two months after the initial TEVAR.”

Dr. Charlton-Ouw describes Perez as a patient who initially could have gone either way with treatment – medical or surgical. “His dissection was doing fine, but he still had pain,” he says. “With TEVAR, the pain resolved almost instantaneously.”

“Before the TEVAR, Dr. Charlton-Ouw told me I’d feel like it never happened and would be home the next day,” Perez says. “He did the surgery around 3 p.m. and by 1 p.m. the next day I was checking out. When I woke up in recovery, it was like night and day. I felt great. When the nurse told me my tear was almost completely healed, I walked around with a smile from ear to ear. He saved my life.”

Perez will follow up with Dr. Charlton-Ouw annually. His six-month CT scan showed almost complete healing of the dissection. “He was a good patient in that he was very clear about what he was feeling,” the surgeon says. “If we pay close attention to what patients say, do a thorough physical exam and take a good history, we can figure out what’s happening. We can’t overstate the value of careful listening.”