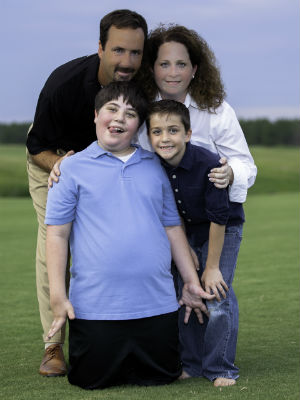 For those diagnosed with a potentially debilitating disease such as multiple sclerosis (MS), it would be understandable to surrender to feelings of despair and hopelessness. But that’s not the case for 39-year-old Leslie Martone, who refused to give up hope and instead has chosen to focus on a “new kind of normal” after being diagnosed with MS in 2003.

“The onset of symptoms for Leslie was very typical in what we see in MS patients,” said J. William Lindsey, MD, Associate Professor, Department of Neurology, UTHealth Medical School, who is affiliated with the Mischer Neuroscience Institute at Memorial Hermann-Texas Medical Center. “Patients who first see come to see me for an initial diagnosis are young, otherwise healthy people. She came to me with optical neuritis, which is the sudden onset of blindness in one eye, and was experiencing numbness in her limbs and her extremities.”

According to Dr. Lindsey, patients like Martone who suffer from a relapsing and remitting course of MS generally suffer a recurrence of symptoms every two to three years. While some have minimal disability, there are others who have more aggressive disease that requires an appropriately aggressive therapy. “We have several different treatments that vary in effectiveness. Unfortunately, the more effective a drug therapy is, the more serious the side effects can be.”

Under Dr. Lindsey’s care, Martone’s first episode of symptoms began to subside after an initial course of drug therapy. During her first few years of treatment, she would occasionally relapse and experienced optical neuritis in her other eye and lesions on her spinal cord. “This can be particularly worrisome because it can lead to more rapid disability,” said Dr. Lindsey.

My arms and legs were numb, and I couldn’t really feel anything from the chest down. Even though I could walk, these episodes would last for two weeks. As a mom of two active sons, this was not going to work for me.

After a few years, Martone switched to a more convenient therapy, but her symptoms returned. “She had 11 new lesions and was suffering clinical deficits as well,” said Dr. Lindsey.

“My arms and legs were numb, and I couldn’t really feel anything from the chest down,” said Martone. “Even though I could walk, these episodes would last for two weeks. As a mom of two active sons, this was not going to work for me.” She and Dr. Lindsey both decided it was time to treat her symptoms more aggressively. In 2010, Martone began monthly infusions of TYSABRI, which she has been on ever since.

Both Martone and Dr. Lindsey are extremely happy with her outcome on the new therapy, and she has remained in remission. “She started off with a very active course of disease,” said Dr. Lindsey. “We have managed it very well and her current treatment is extremely effective for her.”

As for Martone, she credits Dr. Lindsey’s perseverance and her family’s strength with helping her to keep her outlook positive. “Dr. Lindsey has been wonderful. He has treated my disease aggressively and I appreciate it so much,” said Martone. “My family has been my rock. My husband will not let me have a pity party, and I have two sons to care for. I choose to be positive and to not let MS hurt my spirit.”