Leila Pedraza’s Light at the End of the Tunnel 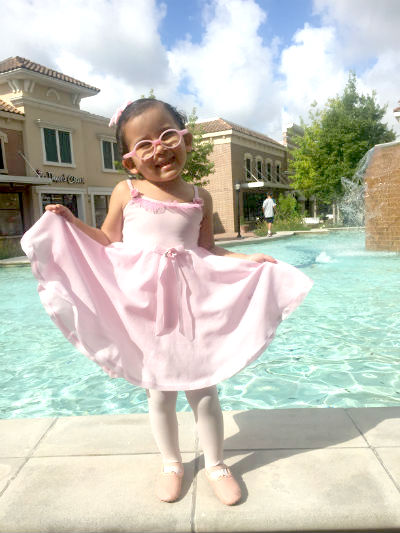 Three-year-old Leila went to her first ballet class in September 2016, an experience that might have been beyond her reach without the medical skills of Amy Schefler, MD, FACS, an affiliated ocular oncologist and retinoblastoma specialist at Children’s Memorial Hermann Hospital’s Texas Retinoblastoma Center in Houston, and Mark Dannenbaum, MD, a neurointerventionalist at Memorial Hermann Mischer Neuroscience Institute at the Texas Medical Center. The two surgeons work together in the only program of its kind in the south-central United States, routinely performing intra-arterial chemotherapy for the treatment of retinoblastoma, a rare pediatric eye cancer that affects only 250 to 350 children each year. At many centers, treatment of the disease is traditionally chemotherapy, with all its negative associated side effects, or removal of the eye.

Leila’s parents, Esteban and Celyna, first noticed something unusual in their daughter’s left eye just after Christmas 2014, when she was 14 months old. “I saw a white reflection when I looked at her eye from a certain angle,” Celyna says. “A few days later, on New Year’s Eve, we both noticed that her eye had drifted slightly, and we became concerned.”

Leila’s pediatrician referred the family to a pediatric ophthalmologist in Katy, Texas.

“As soon as the doctor examined her, he told us he saw a mass in her eye that needed immediate attention and referred us to Dr. Schefler,” Celyna says. “Three days later we were in her office – and very thankful she could see us so quickly.”

The couple had the weekend before their appointment with Dr. Schefler to sort through what they’d just heard. “The ophthalmologist told us what he thought it looked like but couldn’t tell us definitely. So we spent a pretty long weekend running all that through our heads to make sense of it,” Esteban says.

“It was a lot to absorb, but overall we wanted to get a definitive diagnosis and start treatment quickly so she could get better soon,” Celyna adds.

After confirming that Leila had retinoblastoma, Dr. Schefler put the disease and treatment into perspective for the family. “She did a great job of it,” Esteban says. “She drew a diagram on a white board of the eye, its anatomy and what she saw during the exam. Dr. Schefler walked us through the goals of the treatment: ( 1), save the life; (2), save the eye; and ( 3), save the vision.”

The day after confirming Leila’s diagnosis under anesthesia, Dr. Dannenbaum took her to the OR for her first intra-arterial chemotherapy treatment. “Having the capability to inject chemotherapy directly into the artery that feeds the eye eliminates the side effects of systemic chemotherapy and maximizes the therapeutic dose to the eye,” says Dr. Schefler, who, together with Dr. Dannenbaum, was the first in Texas to treat retinoblastoma with intra-arterial chemotherapy. “The technique is new and a paradigm shift in the treatment of retinoblastoma. Before its development, systemic chemotherapy and/or radiation, both of which have serious long-term side effects for children, were the standard of care for retinoblastoma. To administer this new therapy, it takes a large team with extensive experience.”

To initiate the procedure in the OR, Dr. Dannenbaum placed a microcatheter into Leila’s ophthalmic artery, using a minimally invasive neuroendovascular technique. With this approach, the physician makes a small incision in the upper thigh, and guides the catheter up through the patient’s blood vessels to the eye. With the microcatheter in place, he infused a high concentration of chemotherapy directly into the tumor bed over a period of 30 minutes.

Leila underwent three cycles of chemotherapy, an intravitreal injection into the eye and a laser treatment. In the course of her care, she had a preliminary screening MRI and another study every six months in follow-up. “What we’re looking for is pineoblastoma, a tumor that occurs in the pineal gland or suprasellar region of the brain and is independent of retinoblastoma but is associated with it,” Dr. Schefler says. “In Leila’s case there is no evidence of the tumor to date.”

“Although the situation is something you don’t want your child to be in, we’ve been very fortunate with the outcome and the care Leila has received,” Celyna says. “There really are no words to explain how we feel about that. Dr. Schefler and Dr. Dannenbaum are amazing. We were especially struck by how personable Dr. Schefler is and how easy she made it to understand everything that would happen. Sometimes when you speak with doctors you’re so devastated in the moment that the information is overwhelming. She made it easy to absorb and helped us see the light at the end of the tunnel. It gave us a lot of confidence.”

Although Leila is not officially out of the woods, a recurrence of retinoblastoma is unlikely. The couple is working with their daughter, patching her good eye to encourage her to use the treated eye. At first Leila refused the patch, but now she’s comfortable with it for an hour or two at a time, indicating that vision in her weaker eye is improving. “We’ll know exactly how much vision she has when she gets older and can read and participate in vision testing,” Esteban says.

“We speak Spanish at home, and I’ve taken my mother with us to Leila’s appointments at the Texas Retinoblastoma Center,” Celyna adds. “Dr. Schefler is fluent in Spanish and took the time to talk to my mother in her own language. That, along with the care we received, was exceptional.”