Karen Echols: The Warning Signs Were There 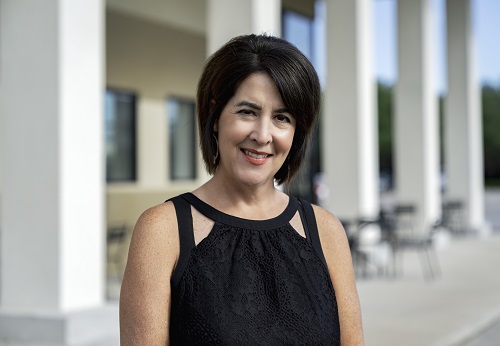 Karen Echols doesn’t mince words: “I think a lot of people don’t like to talk about their poop.”

The 52-year-old Houston hairdresser and mother of three, now a rectal cancer survivor, says she knows a lot about poop. But because she kept ignoring the warning signs, she came by that knowledge the hard way.

Echols first saw blood in her stool when she was 47 or 48 years old. “I thought, eh, it’s probably nothing. I was a wine drinker, so I attributed it to that. Something silly like that,” she says. She mentioned it to her OB/Gyn, who said it was probably hemorrhoids, letting Echols off the hook.

Over time, she began having more frequent, looser bowel movements, which she attributed to dieting and working out. And the blood became more obvious. “Your mind is always talking you into things,” she says. “I just brushed it off.”

Finally, she scheduled her first colonoscopy, but the facility canceled because of her insurance. “I am a hairdresser, so it was hard for me to reschedule,” she says. “I promised my husband I would reschedule ‘tomorrow,’ but tomorrow turned into months.”

Finally, her husband scheduled an appointment for her with gastroenterologist Nikhil Inamdar, MD, who is affiliated with Memorial Hermann Southeast Hospital. “I went in and told him my symptoms,” Echols recalls. “It was right before Christmas. He was really busy. But he took the time and walked me to the front, telling his staff to schedule a colonoscopy for me immediately. He even scheduled a follow-up appointment for me that day. I think he knew.”

The colonoscopy revealed a tumor. The first biopsy came back negative, but Dr. Inamdar ordered a second, which came back positive for cancer. Dr. Inamdar referred Echols to colon and rectal surgeon Erik Askenasy, MD, assistant professor in the Department of Surgery at McGovern Medical School, who is also affiliated with Memorial Hermann Southeast. Dr. Askenasy performed a flexible sigmoidoscopy, a test used to detect cancer in the lower part of the colon and in the rectum. The test revealed a lesion about 2 centimeters in diameter. After a workup, which included a dedicated rectal cancer protocol MRI and CT scans of the chest, abdomen and pelvis, she was diagnosed with stage IIIB rectal cancer.  “Stage III colorectal cancer means that the cancer involves the lymph nodes surrounding the colon or rectum, regardless of the size of the primary tumor itself,” says Dr. Askenasy. “Using pretherapy imaging with MRI, we were able to determine that Karen’s lymph nodes surrounding her rectum were involve with the disease.”

“Hearing my diagnosis was like someone throwing a bucket of cold water in my face,” says Echols. “Dr. Askenasy explained everything to me, including survival statistics, and said I would likely need to undergo chemotherapy and radiation followed by surgery. He told me I would probably have to have my rectum removed. It was a pretty rough day.”

In February 2020, Echols began receiving chemotherapy infusions—eight infusions every other week, 4 hours a session, with the pump (which she named Bob) in for 48 hours after each session. After chemotherapy, she began undergoing chemoradiotherapy—a combination of chemotherapy and radiation treatments—five times a week for 6 weeks, for a total of 28 sessions.

“While I did lose most of my hair, I didn’t lose weight,” says Echols. “And I never suffered from nausea. They (my physicians) really know what they’re doing. I was tired, but I worked through it. My clients said they could see it in my eyes.”

In October 2020, Dr. Askenasy performed a robotic-assisted surgery at Memorial Hermann Southeast to remove the tumor. “Karen responded very well to therapy,” says Dr. Askenasy. “By the time of the surgery, her tumor had shrunk to about .4 millimeters in size. We removed her rectum and performed an ileostomy, creating a temporary opening (stoma) in her abdomen through which solid waste could pass without passing through her colon or rectum, until we could perform a reversal.”

“At first, the (ileostomy) bag was hard,” says Echols. “I kept thinking, I’m doing it wrong. But after a couple months, I thought, if I had to have this forever, it wouldn’t be the worst thing.”

In December 2020, Dr. Askenasy performed ileostomy closure surgery, reversing the ileostomy so that Echols could resume normal bowel movements. Echols says she is still getting used to her new bowel and her new normal. She says she’s never had an accident. And every day gets better and better. There is no evidence of disease. For so long, Echols let life get in the way of getting checked out. Now, she has a message for others who do the same: “If you see anything different, get it checked.”

Dr. Askenasy wholeheartedly concurs, saying, “Ignoring this problem doesn’t make it go away. Even if you don’t catch cancer early, we can still offer effective and durable long-term therapies. And even with aggressive cancer, a good quality of life can be achieved.”