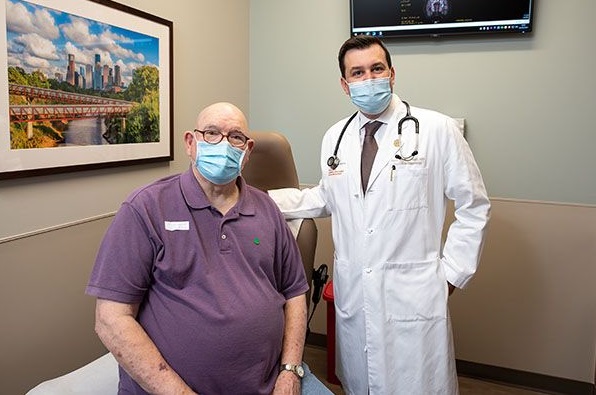 When 78-year-old Joseph Park was diagnosed with stage IB non-small cell lung cancer in December 2019, members of Memorial Hermann’s multidisciplinary tumor board met to discuss his case and treatment options.

Despite being in generally good health, Park has a history of smoking—he says he quit when his first child was born—as well as more recent lung and heart problems.

“In addition to his health issues, Mr. Park’s tumor was fairly large,” says UTHealth Neurosciences radiation oncologist Mark Amsbaugh, MD, a clinical assistant professor at McGovern Medical School at UTHealth and medical director of radiation oncology at Memorial Hermann-TMC, who diagnosed and treated Park. “Fortunately, the tumor, located in the right upper lobe, had not spread to his lymph nodes or outside of his chest.”

“Given his age and health issues, including the fact that he wears a pacemaker, we knew we needed to utilize the best radiation technology available,” says Dr. Amsbaugh. The team utilized the EDGETM, an advanced image-guided radiation therapy system, to deliver highly targeted high-dose radiation therapy in five treatments over 2 weeks.

Park recalls the day he received his last treatment. “I rang that bell! It was the most marvelous feeling since I had my children.” He has five children, eight grandchildren and 15 great-grandkids. Three months after Park’s last treatment, a CT scan showed the tumor was responding. “Six months post-treatment, we saw no evidence of active disease,” says Dr. Amsbaugh.

“I’m in good health,” says Park, who recently turned 79. “I do 30 squats three times a day, walk a quarter mile every morning and work out with 70-pound weights.” Park says his cancer treatment experience was positive. “I’ve always bragged about how Memorial Hermann people have treated me. It’s a good environment. The people are very professional and always make me feel comfortable.”