During a routine football practice Jordan suddenly felt dizzy and showed signs that something was wrong. He was immediately taken to Memorial Hermann where affiliated pediatric neurologist Dr. Ian Butler along with neurologist Dr. Nicole Gonzales diagnosed Jordan as having had a stroke. Later after further testing it was discovered that Jordan had a hole in his heart due to congenital heart disease that had gone undetected since birth. After Jordan's stroke symptoms had dissipated, Memorial Hermann affiliated pediatric cardiologist Dr. Rao used minimally invasive surgery to fix Jordan's heart.

A Blow to the Heart

The first thing I saw was a drooping cheek on the left side. I immediately thought stroke and conducted the FAST assessment.

Greer still remembers how his left side felt numb following the tackle he made towards the end of the Friday practice. He also remembers ringing in his head as he staggered to the sideline.

Soon after, Wilson received a call from Head Coach Darwin Pennye, who voiced concern about Greer. Wilson immediately drove to the school to perform an assessment of the athlete. Greer’s parents were already there.

“The first thing I saw was a drooping cheek on the left side,” said Wilson. “I immediately thought stroke and conducted the FAST assessment, which stands for face, arms, speech and time. Jordan could smile, raise his arm, talk and stick out his tongue. That’s when I started thinking two plus two does not equal four in this situation.”

Wilson then considered other possible conditions and made the appropriate assessments, including eye tracking and pupil size, as well as range of motion and strength of Greer’s neck. These were fine, but Greer’s vision was blurred.

Greer recalls the strange feelings he had during these assessments.

“When Bubba did the strength tests, it was like the body parts on my left side weren’t part of me, said the 16-year-old athlete. “The sensation was like if your hand is asleep and you feel like ants are crawling in you.”

Wilson recommended to Greer’s parents that they have their son immediately evaluated at Memorial Hermann Southeast’s Emergency Center. After arriving at the hospital, it was determined that Greer needed a higher level of care. An ambulance transported him to Children’s Memorial Hermann Hospital for additional tests. 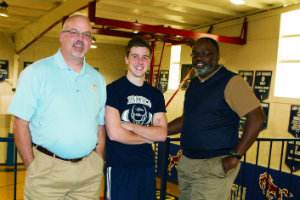 On Saturday morning, Greer awoke to a team of doctors surrounding his hospital bed. This is when he learned he had suffered a stroke.

Over the weekend, the severity of Greer’s symptoms diminished. By Sunday night, his vision had improved slightly, but it was still blurred. He could walk slowly and still had numbness.

As tests continued, Greer often heard the phrase “just to make sure” from his caregivers. His reaction was “oh no” because the phrase meant doctors were still trying to determine what caused his stroke.

During his six-day hospital stay, Greer learned he had been born with an atrial septal defect (ASD), a hole in the septum, which is the dividing wall that separates the heart’s two upper chambers. ASDs are the most common congenital heart defect in adults.

Greer’s ASD was diagnosed as Patent Foramen Ovale (PFO). This type of defect works like a flap valve, opening during certain conditions when there is more pressure inside the chest. Doctors surmised that Greer had a blood clot blocking the hole and his tackle dislodged it, causing a stroke.

There are generally no symptoms associated with a PFO, but a stroke is often the first indication of the defect. More than 40 percent of people who experience a stroke in the absence of other risk factors for a stroke, are diagnosed with PFO. Additional tests showed Greer had an 8-millimeter hole in his heart. One month later, surgery closed the hole.

Good can come from anything. That’s definitely what happened to me.

Greer now serves as his school’s soccer captain and football chaplain. He feels blessed to be playing guitar, his first love, something he feared losing when his left side was numb. He fondly remembers the music therapist at Children’s Memorial Hermann letting him hold a guitar, which lifted his spirits.

Wilson still checks on Greer when he visits his school, jokingly calling him “Stroke.” Greer is upbeat about his experience, believing it has enabled him to share his faith with his caregivers and those he met through Instagram posts he made from his hospital bed.

“Good can come from anything,” said Greer. “That’s definitely what happened to me.”