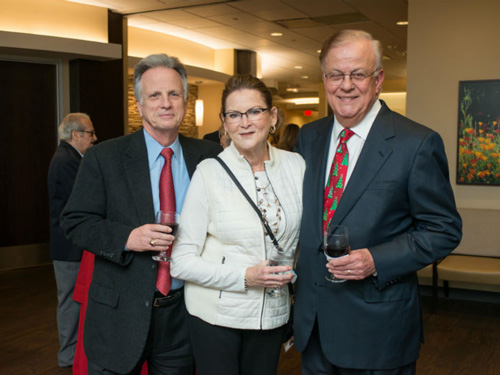 John Sigmon attributes his remarkable recovery to the love of his wife, the power of prayer and the care provided by Atilla Ertan, MD, FACP, AGAF, MACG, director of the Ertan Digestive Disease Center at Memorial Hermann-Texas Medical Center and a professor and acting director in the Division of Gastroenterology, Hepatology and Nutrition at McGovern Medical School at The University of Texas Health Science Center at Houston (UTHealth).

In 1996 at the age of 45, Sigmon suffered sudden severe abdominal pain that sent him to the emergency room of a community hospital in Southern California, where he lived at the time. He was diagnosed with acute hemorrhagic pancreatitis, a deadly disease with a 30 percent to 50 percent survival rate. A devout Catholic, he was administered the church’s Last Rites, the sacrament of the dying. During the six-month hospitalization that followed, he was administered Last Rites twice more.

“The disease struck me out of the blue, and those six months were like running a gauntlet. The pain I suffered was a solid 12 on the 0-to-10 pain scale. I couldn’t have made it without the power and support of my wife, Laura,” he says. “On the good days, she was there 14 hours and on the bad days, she never left my room. She was my guardian angel.”

Five months into the hospitalization, Sigmon lapsed into a coma and was put on life support. In the evening of the sixth day of his coma, his attending physician told Laura Sigmon that he believed her husband would likely pass away in the next 24 hours, and that there was nothing else they could do that day, except go home and pray.

“After spending the day by my side, she left for the evening, but something made her come back and sit with me,” he says. “She prayed that she was ready for me to live or die, whatever God’s will was, as long as I was out of my suffering, but that she wanted one last thing: to hear me say I loved her. She was willing to allow her life and the life of our children to be changed dramatically so that I would no longer have to suffer. There’s no greater love than that.”

At that moment, Sigmon came out of the coma, opened his eyes and tried to talk but was unable to because he was still on a ventilator. Instead, he used sign language to tell her he loved her, pointing to his eyes, his heart and then to her. Three weeks later, he walked out of the hospital, the first of many miracles.

In 1998, concerned about his health and life expectancy, his company transferred him to Houston to be close to family. The couple bought a home in Sugar Land and made an appointment with Charles Brunicardi, MD, a gastrointestinal surgeon and scientist who, at the time, was chair of the Michael E. DeBakey Department of Surgery at Baylor College of Medicine.

“During my initial attack of pancreatitis, the splenic vein thrombosed, and my spleen went from the small organ it is in most people to a very large size, which created portal hypertension around my spleen and stomach,” Sigmon says. “I was forming varices in my stomach and upper intestine – little aneurysms that at any time could break and cause me to bleed out.”

After a very difficult but successful eight-hour surgery and a remarkable recovery, Dr. Brunicardi referred his patient to Dr. Ertan for postoperative gastroenterology follow-up. Sigmon counts both doctors among his many miracles.

“Over the next six years, until 2004, I had occasional flare-ups of pancreatitis,” he says. “Because of all the damage to my pancreas and other digestive organs, my biliary duct was prone to narrowing. Dr. Ertan was always there to take care of the stricture and my overall critical condition.”

In 2004, when Dr. Ertan was unable to reach the biliary duct endoscopically to replace a stent, he called in Wade Rosenberg, MD, a highly skilled surgeon who specializes in procedures of the digestive tract. The surgery was successful, and under the skillful postoperative care of Dr. Ertan and his team, Sigmon has had no major problems in the 13 years since the surgery.

“If I have symptoms of a recurrence of pancreatitis, Dr. Ertan inspects the biliary duct to see if a procedure is needed,” he says. “My story is in large part Dr. Ertan’s. I want people to know how skilled, knowledgeable and willing to challenge the unknown he and his group are. I wouldn’t be here today if I hadn’t had access to his skill. He’s extraordinarily talented, and he’s also caring. You can imagine the emotional stress my wife was under. During one of my many hospitalizations, he put his arm around her and said, ‘Let’s go have lunch and just talk.’ He wanted her to know that he was taking good care of me and that I would get through this with short-term and long-term management. He’s phenomenally smart, well published and greatly respected as a gastroenterologist, and he’s also a phenomenal field technician. The saying is that if Dr. Ertan can’t do it, no one can. Over the years, doctors have told us that my particular condition and the resulting anatomy is something that can’t be found in the medical literature. He literally saved my life several times.”

Dr. Ertan admits that Sigmon’s case was very challenging. “When he came to us, he was in multiple organ failure,” the gastroenterologist says. “He had cholangitis with an obstructed biliary duct. His pancreas was 90 percent gone due to necrosis. His kidneys were shutting down, he was in respiratory distress, his blood pressure was low, his heart was not beating well, and he was diabetic. We discussed his case and similar cases in many medical meetings and made decisions about how to provide care. Gradually over a year he improved. John and his family believed that he would live with a good quality of life, and we also had some good luck on our side.

“Twenty years ago when John was first diagnosed, this type of case was not well studied,” he adds. “We’ve learned a lot from his case over the years, and we have shared that knowledge through the medical literature. The type of family support he had is important in critical cases. There’s no magic touch. It takes consistent, careful long-term management, which is what we did in this case, and it worked.”

Dr. Ertan routinely takes on the complex and complicated cases referred to him. “If you do complex procedures often, they become easier, and gradually we learn how to handle this type of critical case. Our goal is to ensure that our patients go back to their families, join their friends, participate in the community and return to the doctors who referred them.”

Sigmon stresses the importance of trusting your doctors. “I look at this whole experience as my running of a gauntlet, and I’ve survived it through the grace of God and the care of my wife, family and doctors,” he says. “It’s been a challenge, and over the years my situation and my life have touched many people. I hope this story touches others and lets them know about the lifesaving work doctors do these days, and that God does watch over us and perform miracles. I’m living proof of that.”

To schedule an appointment or contact us, please fill out the form below.

Thank you for contacting the Memorial Hermann Ertan Digestive Disease Center. We have received your inquiry, and a team member will contact you soon.