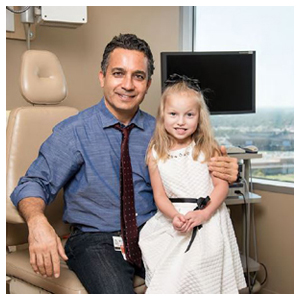 Pediatric otorhinolaryngologist, Sancak Yuksel, MD, at Children’s Memorial Hermann Hospital has provided care for Jayda Hector since shortly after she was born in October 2010 at just 26 weeks’ gestation. After 12 trips to the OR at Children’s Memorial Hermann Hospital, the six year- old girl was recently discharged from care in an office visit her mother describes as “bittersweet.”

“We got very attached to Dr. Yuksel over those six years, and we’ll miss him,” says Houstonian Karen Springer, whose daughter spent her first three months of life in the hospital’s Neonatal Intensive Care Unit, where Dr. Yuksel is a member of the physician team. “We’ll be forever grateful that he saved Jayda’s life and in his wisdom made the right decisions for her.”

A long period of endotracheal intubation and mechanical ventilation left Jayda with tracheal scarring and subglottic stenosis, the most common acquired anomaly of the larynx in children and the most common condition requiring tracheostomy in children younger than one year of age. When Dr. Yuksel checked her airway three months after her discharge from the NICU, he noted that her larynx and trachea were only 3 to 4 millimeters in diameter – about the size of a coffee stirrer – and 90 percent blocked, obstructing the passage of air to the lungs. “Balloon dilation is our first choice for the treatment of severe airway stenosis in children and adolescents,” says Dr. Yuksel, an associate professor in the department of Otorhinolaryngology- Head and Neck Surgery McGovern Medical School at UTHealth. “We always hope to avoid tracheostomy and the risks of early and late complications associated with it.”

In Jayda’s case, balloon dilation opened the airway but failed to sustain it. In June 2011 Dr. Yuksel took her back to the OR, where he performed a tracheostomy and tonsillectomy/adenoidectomy to prepare her for later decannulation. The goal was to give her time to grow before undergoing laryngotracheal reconstruction to permanently widen the airway. At eight months of age, she weighed only eight pounds.

Four years and many office visits later, in June 2015, she was ready for the reconstruction. In a successful five-hour procedure, Dr. Yuksel harvested cartilage from a rib and sutured the grafts to the trachea to increase its diameter. “Laryngotracheal reconstruction is one of the most complex surgeries in pediatric laryngology,” he says. “Patients require several trips to the OR and an extended stay in intensive care. There’s a high risk of complication due to the open chest wall, which is why we always hope for success with balloon dilation.”

In February 2016, Jayda was back in the OR for a successful decannulation. She spent two nights in the hospital under observation. “Jayda has handled the surgeries and hospital stays well, and is a very playful and happy girl,” Springer says. “When we scheduled our six-month follow-up appointment, Dr. Yuksel told us we could cancel if we didn’t feel like we needed it. Jayda started jumping up and down yelling, ‘Cancel! Cancel!’ He looked at her and said, ‘Jayda, I’m going to miss you.’ He really cares about his patients and puts their needs first. Over the years we’ve gotten to know him well and can honestly that he’s quite an amazing doctor.”