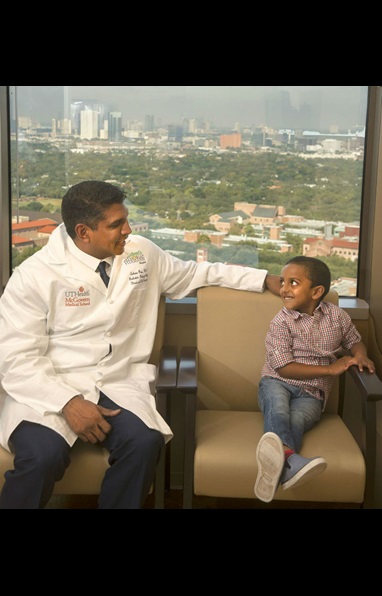 On Easter Sunday 2016, three-year-old Ishaan Pavuluri was with his family at a pool party at the home of a friend. After an Easter egg hunt, his mother, Deepthi Bollu, was inside helping Ishaan and his older brother change into their gym shorts.

“It all happened in less than a minute,” Bollu says. “While I was looking after my older son, the little one escaped, and I knew he went toward the pool. We ran outside and looked around, then ran to the front and side of the house. By then I had a bad feeling, and when we looked in the pool, we saw him at the bottom. I screamed and a gentleman jumped in and pulled him out. He had turned blue.”

After nearly three minutes of CPR administered according to instructions from 911, the EMS team arrived. Ishaan was intubated in the ambulance and transported by Memorial Hermann Life Flight® to Children’s Memorial Hermann Hospital in the Texas Medical Center, where he was admitted to the Pediatric Intensive Care Unit. A CT scan showed mild brain edema, and he was put on a ventilator. Two days later, when he showed improvement and responded to questions from the pediatric neurology team, his intensivist authorized removal from the ventilator and extubation.

“For the next day or so, Ishaan kept improving but toward the end of the week, he developed stridor,” Bollu says. Soham Roy, MD, FACS, FAAP, director of pediatric otolaryngology at Children’s Memorial Hermann Hospital, was called in to evaluate the airway.

“It’s not uncommon for intubation in the field to cause trauma to the airway mucosa, especially in children,” says Dr. Roy, professor and vice chair of otorhinolargyngology-head and neck surgery at McGovern Medical School at UTHealth. “When we examined him endoscopically, we found a significant subglottic injury.”

The following day Dr. Roy took Ishaan to the OR, where he performed a direct laryngoscopy and bronchoscopy. A large scab in the subglottis was debrided and dilation of the airway was performed with an airway balloon. The next day, after evaluating Ishaan’s progress, Dr. Roy discharged him home. “In most cases, one endoscopic treatment will resolve the issue, but two days later Ishaan was readmitted with the same symptoms,” Dr. Roy says. “We took him back to the OR and this time repeated the balloon dilation, injected a corticosteroid and postoperatively gave inhaled steroids as well. We observed him for several days and released him after a follow-up endoscopy showed he was progressing well.”

“What we remember and appreciate most about Dr. Roy is his confidence,” Bollu says. “We were very worried when the stridor came back after the first procedure. Dr. Roy said, ‘Yes, there are airway issues, but we can handle them.’ That kind of confidence gives you an immediate mental boost. It doesn’t come with all doctors. First, you need good medical skills and then you need good communication skills. He told us he would take care of Ishaan, and he kept his promise. Both of the procedures were fast and clean. He knows what he’s doing.”

It’s always a great experience to treat a child who has a serious airway issue without having to place a tracheostomy or perform an extensive open airway operation.

Dr. Roy says he and his team were happy they could resolve the issue with minimally invasive treatment. “It’s always a great experience to treat a child who has a serious airway issue without having to place a tracheostomy or perform an extensive open airway operation,” he says. “Thanks to the multidisciplinary care Ishaan received at Children’s Memorial Hermann Hospital for a near-drowning event and its sequelae, he suffered no long-term injury or side effects. That’s always a fine feeling.”