“You Never Expect to Need It:” A Family Expresses Gratitude for Memorial Hermann’s Infant CPR Class 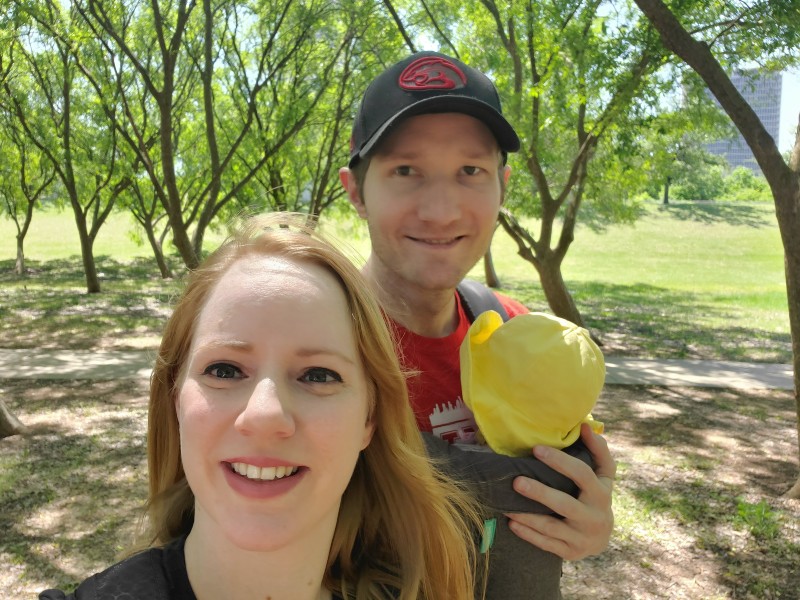 On a recent Saturday this past August, new parents Chris and Salma were hosting a small dinner party for friends. They had recently moved into a new home and were excited to get a group together for the first time since the pandemic had started. Between work, life and raising a young baby daughter, they were both looking forward to the evening.

But then, the unexpected happened.

Their daughter, who was a little over 19 months old at the time, began choking.

Salma was in the living room talking when one of her friends, who was sitting with their daughter and another child, called out to her.

“I remember her calling over to me saying, ‘I think she may be choking,’” Salma recalled. “I turned around and ran over to her while another friend called out to his wife, a nurse, who was changing her own child’s diaper in the bedroom.”

But Salma was already over to her daughter, who was frantically grabbing at her throat. Without thinking, Salma flipped her onto her left forearm and gave her a series of firm back blows. A few pieces of apple came out of her mouth, but the blockage wasn’t yet cleared.

“She was starting to change color and I could tell she wasn’t getting oxygen,” Salma recalled. “I hit her back a few more times and then the rest came out. As soon as it did, you could feel her just relax.”

The entire episode was over in less than a minute. Salma hugged her daughter tight and sat down on the couch with her. After a while, when she was finally able to process what had just happened, a thought entered her mind.

“I started to wonder how I even knew how to do that,” Salma said. “I’m an engineer; I’m not in the medical field at all. Then it dawned on me—it was from the class my husband and I took when I was pregnant.”

In late 2020, as Salma and Chris were preparing to become first-time parents, Salma’s OB-GYN gave her a pamphlet with information about classes offered at Memorial Hermann designed to help expectant parents prepare for childbirth and beyond. These classes, which are available online or in-person, cover topics ranging from childbirth education to newborn care, breastfeeding, infant CPR, healthy pregnancy and infant massage. In addition, there are online support groups for mothers during the third trimester of their pregnancy through their baby’s first year of life. The classes are all geared towards new parents as well as current parents looking for a refresher course, and there are also classes available for other family members, including grandparents and siblings, that provide opportunities for learning and support.

“We are so proud to offer this resource to our patients and members of the community,” said Evelyne Volny-Anne Nguyen, RN, IBCLC, LCCE, who, along with Erika Robinson, BSN, RN and Melissa Hernandez, RN, LCCE, IBCLC, run the Perinatal Community Education program at Memorial Hermann Memorial City Medical Center. The three educators also are certified by the American Heart Association as Basic Cardiac Life Support instructors. “Our goal is to help people feel as prepared as possible to care for the newest members of their families.”

The soon-to-be parents decided to sign up for a handful of the classes offered, including a course on infant CPR, which covered what to do in the event a baby is choking.

“Neither Chris nor I had much experience with babies—we didn’t even know how to change a diaper until we had our daughter,” Salma recalled. “We thought the classes would help us prepare.”

Because the couple took their classes in late 2020 during the height of the COVID-19 pandemic, their sessions were virtual. But that didn’t affect their ability to learn the material.

A manikin was sent to them prior to the virtual class after they signed up online. “We practiced on a baby manikin so that we would know what to do in a real situation,” Salma said. “Evelyne watched each couple and then gave everyone individual feedback. I think that was really helpful because it gave me that subconscious muscle memory that I drew on nearly 20 months later.”

After the episode, Salma and Chris discovered that their daughter had grabbed an apple from the fruit bowl on the table; somehow, she had taken a large bit of it, and that was ultimately what she had choked on.

“It happened so quickly, and I never would have thought she would have done that, and certainly not that she would have choked in that situation,” Salma said. “I’m just so thankful that I knew about the classes and that we had taken them. You never expect to need it, but you are so grateful when you do.”

Salma added that she was surprised that nearly two years after, she still knew exactly what to do in the moment. She said that even for people with more experience around babies, the classes are useful because they go into detail about different possible scenarios, which differ depending on the situation and if another adult is present.

Preparing for Childbirth at Memorial Hermann Classes and Events