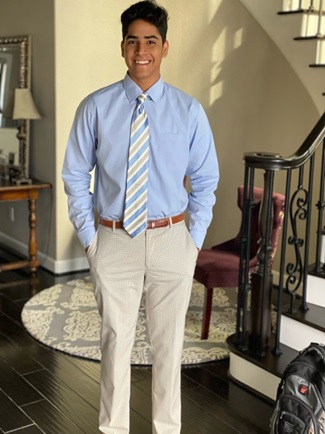 On May 1, 2022, the Crohn’s and Colitis Foundation will be holding its Take Steps Walk and 17-year-old Mateo Skeete, a patient at Children’s Memorial Hermann Hospital, will be this year’s patient honoree. This walk will make an impact in the fight against Crohn’s disease and ulcerative colitis by helping fund the Crohn’s & Colitis Foundation’s critical research and patient programs.

As a young child, Mateo Skeete had always been the picture of health. But in March 2019 when Mateo was 14 years old, his mother, Carla, noticed her son began showing unusual symptoms.

“Mateo had lost a significant amount of weight,” said Carla. “He shed 15 pounds in a matter of 5 weeks. He didn’t have other symptoms at the time, except for some occasional abdominal cramping. Desperate to find answers, I took him to his PCP where they ran blood tests on him.”

Mateo’s bloodwork came back normal with the exception of his hemoglobin. It was low for his age – it was 10.1. His PCP repeated the lab work, but this time added an iron panel and stool test. One week after his second round of blood tests, his results came back. His hemoglobin had dropped to 9  he was iron deficient, and he tested positive for blood in his stool. Mateo’s PCP recommended he see a pediatric gastroenterologist for further evaluation.

“As a caregiver, the challenging part for me was trying to find a pediatric gastroenterologist  because there aren’t very many in the Houston area,” said Carla. “The GI doctor near our home in Clear Lake couldn’t see Mateo for 2 months, and I didn’t want to wait that long. So, I reached out to office of Dr. Fernando Navarro. When I learned that Dr. Navarro had an opening , we scheduled an appointment with him. When we met Dr. Navarro for the first time, I knew Dr. Navarro was the one. I could tell he genuinely cared about my son.” Dr. Navarro is an assistant professor at McGovern Medical School at UTHealth Houston and is affiliated with Children’s Memorial Hermann Hospital.

Dr. Navarro suspected that Mateo might have either Crohn’s disease or ulcerative colitis, two types of inflammatory bowel diseases (IBD). Both diseases are chronic conditions characterized by inflammation of the lining of the gastrointestinal tract. Dr. Navarro wanted to run labs on him, and this time he included inflammatory markers and another CBC test. The lab results showed Mateo’s inflammatory markers were elevated and his hemoglobin dropped from 10 to 8.1 within a 2-week time period. Dr. Navarro also recommended an upper endoscopy and a full colonoscopy to confirm his suspicion.

“About 3 days after our consult with Dr. Navarro, I will never forget that evening when my son called me for help,” said Carla. “Mateo was upstairs in the bathroom, and he said, ‘Mom, I need help.’ When I ran up there, the amount of blood I saw in his stool was such a frightening image to see. I immediately rushed Mateo to the emergency room (ER) at Children’s Memorial Hermann Hospital. By now, he was used to being pricked and prodded many times. When we got to the ER, they repeated his lab work, started an IV, and by that time, I had received a phone call from Dr. Navarro. He wanted to perform a colonoscopy on Mateo earlier than previously scheduled. Five days later, my son had the exam.”

While awaiting the pathology results, Dr. Navarro told Carla that her son showed the classic signs of Crohn’s disease based on what he saw during the colonoscopy. The inner lining of Mateo’s large intestine was inflamed and purulent to the point where he could not proceed any further with the probe because Mateo began to bleed. Immediately, Dr. Navarro put Mateo on different IBD medications to help reduce the swelling and inflammation in his digestive tract.

“Unlike colitis, Crohn’s disease not only affects the large intestine (colon) but can also inflame other parts of the digestive tract. Mateo had multiple ulcers throughout his entire esophagus and fissures all the way down to his rectum. While there is no cure for Crohn’s disease, there are many treatment options that we can prescribe to help relieve symptoms, slow the progression of this chronic inflammatory disorder and improve the overall quality of life for patients with this condition,” said Dr. Navarro.

After his diagnosis, Mateo was put on a treatment regimen that consisted of high dose steroids, anti-inflammatory and immune-suppressive medications to control his inflammation. After several months when Mateo did not respond to treatment, Dr. Navarro introduced him to another medication and was able to wean him off steroids. This medication is an immunosuppressive drug that is given via infusion to patients with IBD who have not responded well to other therapies, such as steroids.

The new medication worked. After being on this new regimen for 3 years, Mateo says he is feeling great – better than he has ever felt before. He is completely off steroids, and he takes medicines, including an infusion every 6 weeks at the Infusion Center at Children’s Memorial Hermann. To monitor his Crohn’s disease, Mateo has regular blood tests to check on his markers and quarterly calprotectin tests to monitor any inflammation in his stool.

“Dr. Navarro has been a godsend,” said Carla. “This man literally moved mountains for us. He treated Mateo like his own. He’s really on top of his research and ensuring my son is on the best medications available to treat his symptoms, with the goal of getting him to deep remission. And most importantly, anytime I had questions or concerns, he or his assistant responded promptly.”

While living with Crohn’s disease can be challenging at times, Mateo credits his support system for keeping him mentally strong beginning with his mom, who he calls his biggest supporter.

“My mom has been there for me and found the best GI doctor that any patient could hope for,” said Mateo. “Dr. Navarro has made my journey less scary, especially when I was first diagnosed. My nurses, Faleda and Michelle, in the Pediatric Infusion Center at Children’s have been amazing. I can’t thank Laura in Child Life enough for connecting me to various support groups like the Crohn’s and Colitis Foundation. I am also glad to be part of the hospital’s Children’s Patients Advisory Council. Talking to other patients who I can relate to reminds me that I am never alone in my journey. And of course, I must thank my teachers for their support and for helping me stay on track with all my schoolwork.”

This May, Mateo will celebrate a big milestone when he graduates from Friendswood High School and heads off to college in the fall where he plans to major in biochemistry. Mateo credits his schoolteachers and his counselor, Ms. Hickman, who were an instrumental part of his support system in school.

Recently, he was named the Children’s Memorial Hermann Hospital patient honoree for the “Houston Takes Steps” Crohn’s and Colitis Walk on May 1.

Carla and her son, and the CMHH team will lace up for the walk. As a patient ambassador, Mateo can’t wait to share his story and remind others that they are not alone in their journey.