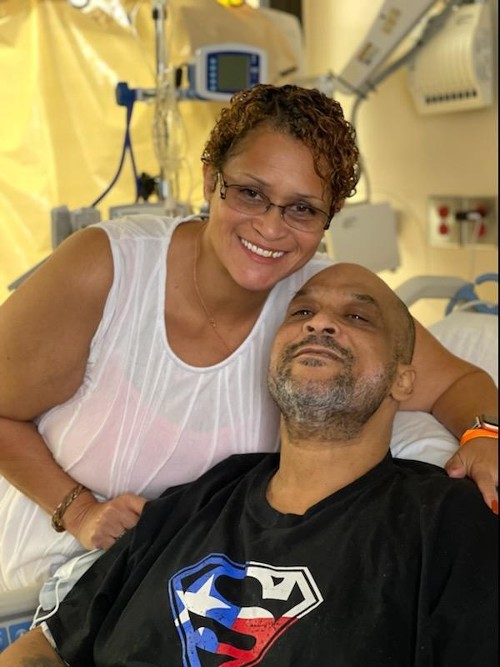 The last time that Orybie Simien recalls not being hospitalized regularly was about 10 years ago. The 58-year-old Jersey Village resident has been coping with congestive heart failure and atrial fibrillation, rendering him disabled and keeping him in and out of hospitals to manage his health.

“I was going in a circle,” he said of his life. “I was spending more time in the hospital than out, and everyone had given up hope on me.”

Severe symptoms from his congestive heart failure in August 2021 landed Simien at Memorial Hermann Memorial-Texas Medical Center, where he remained in a coma for 17 days.

“My kidneys began to fail, and my lungs had collapsed,” he recalled. His sister came from Louisiana, as they were certain he would die. “My heart was only functioning at 8 percent.”

“We ran tests on Mr. Simien and discovered that his mitral valve, which separates the upper and lower chambers of the heart’s left side, wasn’t functioning properly and was allowing blood to flow backward, meaning his heart wasn’t pumping enough blood throughout his body. It’s like a door that won’t close because the walls of its frame have been stretched.”

Dr. Patel explained that this “functional regurgitation” resulted from Simien’s heart muscle growing larger to compensate for its diminished ability to pump blood.

“Dr. Patel didn’t take the stance that other doctors had taken with me,” Simien said. “He said he could help me, so I agreed to have the procedure.”

On March 3 of this year, Simien, under general anesthesia, had a MitraClip device inserted through a catheter, or hollow tube, and threaded to his heart from the femoral artery in his groin. Using real-time images produced by ultrasound and X-ray technology in the catheterization lab at Memorial Hermann Memorial City, the MitraClip device was clipped to each of the mitral valve flaps, or leaflets, and pulled together to create a tighter close when the heart contracts to push blood out of the heart. This tighter close prevents the backward flow of blood that was causing Simien to experience breathing problems, fluid buildup and exhaustion. The procedure typically lasts up to three hours, and patients are able to go home the next day.

“The MitraClip device can be used for functional regurgitation, like Mr. Simien was experiencing from his heart failure, and for primary mitral valve regurgitation, where the leaflets of the valve are diseased and can’t completely close,” Dr. Patel explained. “It’s generally reserved for people who aren’t candidates for surgery, as was the case with Mr. Simien.”

As a cardiologist, Dr. Patel is part of a multidisciplinary team of heart and vascular specialists who meet regularly at Memorial Hermann Memorial City to discuss cases and collaborate on the best treatment options. In addition to cardiologists, the team is made up of heart surgeons, interventional cardiologists and nurses.

“This type of treatment used to be offered only at Memorial Hermann-Texas Medical Center, but we’ve been successful at safely offering these procedures at our other hospitals to help patients have access to care,” Dr. Patel said.

“Prior to having this procedure, I needed oxygen 24 hours a day, 7 days a week,” Simien said. “I couldn’t breathe on my own or walk on my own, and I had to keep going to the hospital to have fluid drained from my body.” Furthermore, Simien was on a medical regimen of 32 medications. He said his life consisted of lying in bed, watching TV and sleeping. “I had no will and was in a big state of depression,” he admitted, holding back his emotions.

Now, Simien has stopped using oxygen. He no longer needs a walker. He’s lost 125 pounds – most of which was from excess fluid created by the leaking valve, and he is slowly reducing his medications. He now looks forward to waking up early in the morning, bathing without assistance, cooking his own meals, cleaning his home, going to church and the movies, and taking walks around his neighborhood without his walker.

Of the changes that have occurred in his life since his procedure, Simien remains astounded. “I can’t explain how life-changing this has been for me,” he said. “I am being restored. I have my life again.”