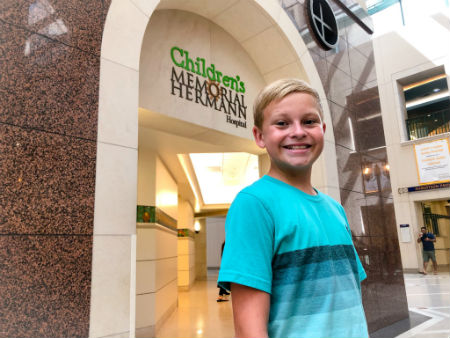 Thirteen-year-old Grayson likes typical kid things – basketball, taekwondo, running, pizza and birthday cake. For Grayson, these things, which a “typical” kid might take for granted, carry a potential danger. Without proactive management of his insulin intake, too much physical exertion can send his blood sugar plummeting; too many carbohydrates can send it skyrocketing. Either can be life-threatening for Grayson, who has type 1 diabetes.

First diagnosed at 12 months old, Grayson has lived his whole life in the shadow of diabetes. “For the past twelve years, diabetes has been the extra denominator for me, my family, my teachers, coaches and friends,” says Grayson. “It affects the way I go through life – how I play sports, think at school, sleep and TONS of other things I do every day. Basically, diabetes changes everything. If I don’t keep my blood sugars in a good range, things can go bad really fast.”

“Grayson was always a happy baby up until he was about 11 months old. He then became really fussy,” recalls Christy, Grayson’s mother. She finally asked her pediatrician to do every test possible. She knew something was wrong. Later that day, the pediatrician called, saying, “Christy, we’re in deep trouble. We need to get Grayson to the medical center.”

A urinalysis showed ketones in Grayson’s urine, a sign that his cells were starved of sugar and were burning fat or protein for energy, likely because his body wasn’t producing insulin. At the same time, Grayson’s blood-sugar levels were catastrophically high.

Christy recalls the mad dash to nearby Memorial Hermann Katy Hospital’s Emergency Center, where a Memorial Hermann Life Flight® helicopter was standing by to transport Grayson to Children’s Memorial Hermann Hospital in the Texas Medical Center. Fortunately, doctors were able to stabilize Grayson, so he could be transported via ground ambulance, enabling Christy to ride along.

The handoff from Memorial Hermann Katy to Children’s Memorial Hermann Hospital was seamless. When they arrived, doctors explained to Christy and her husband, Jeff, that their 1-year-old son had type 1 diabetes. They learned that his pancreas had stopped functioning, and that they, Christy and Jeff, would need to administer insulin to him every day, for the rest of his life.

Type 1 diabetes is a disease that occurs when the body stops producing insulin, the hormone that helps move sugar, or glucose, into the body’s tissues, which use it as fuel. Type 1 diabetes was previously known as juvenile diabetes as it is primarily diagnosed in children, but adult diagnosis has increased significantly in recent years. Type 1 diabetes requires constant monitoring of blood-sugar levels and management with insulin.

The next day, a certified diabetes educator visited them and showed them how to give Grayson insulin shots, which, Christy says, was a turning point, “It was just like, OK, this is real, and we’ve got to figure this stuff out.” That day, Christy and Jeff began giving Grayson four to six insulin shots a day and pricking his fingers up to 10 times a day to test his blood-sugar levels. 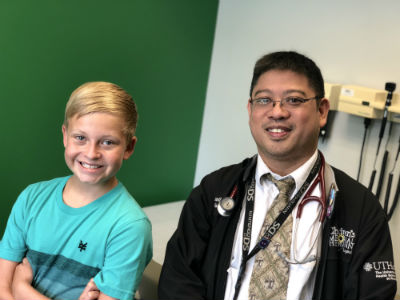 As Grayson’s endocrinologist, Nunilo Rubio, Jr., MD, affiliated with Children’s Memorial Hermann Hospital and assistant professor in the division of pediatric endocrinology at McGovern Medical School at UTHealth, points out, “People often confuse type 1 diabetes with the more common type 2 diabetes. Type 1 diabetes is much less common and accounts for only 5 percent of people with diabetes. All patients with type 1 diabetes must take insulin for the rest of their lives, whereas some people with type 2 diabetes can control their blood glucose through diet and exercise.”

Grayson’s family is dedicated to making sure he stays healthy but also has a childhood – one that includes an occasional carb splurge and the high-energy sports and activities he enjoys. Their goal is to manage his diabetes, not let his diabetes manage him.

When Grayson was 3 years old, he began wearing an insulin pump, a device that enabled Christy and Jeff to adjust Grayson’s insulin doses based on his diet and activities. By using the pump, they were able to stop giving shots every day and instead just change a pump injection site once every two to three days.

At age 4, he began using a continuous glucose monitoring system (CGMS), which continuously monitors his blood sugar levels – with zero finger sticks. Grayson would become one of the youngest in Houston to use the device.

The CGMS reports results every five minutes and alerts him (or his parents, via smartphone) when Grayson’s levels are getting out of range. “Dr. Rubio listened to us and knew we could handle it – knew Grayson could handle it. He is great. He meets the patient where they are rather than just following the standard conservative scripted approach so often given to diagnosed patients. He is focused on making sure we have access to the newest technology to get the best care for Grayson,” says Jeff.

Grayson and his family are very involved in JDRF, the leading global organization funding type 1 diabetes research. Both Jeff and Dr. Rubio serve on the Board of Directors of the Houston Gulf Coast Chapter. Originally, the family sought help and advice; now they “pay it forward” by supporting newly diagnosed families. Grayson serves as a JDRF ambassador and is passionate about educating the community and his peers.

Children’s Memorial Hermann Hospital works hand-in-hand with the JDRF, providing newly diagnosed families with JDRF Bags of Hope®, which contain educational materials, and a Rufus, the Bear with Diabetes® plush toy. Children’s Memorial Hermann Hospital staff and affiliated physicians, including Dr. Rubio, participate in the annual educational and networking event for people with type 1 diabetes, their family and friends, and participate in the annual JDRF One Walk.

Christy says parents of kids with type 1 diabetes are often asked, “Do you have it under control?” “And I say, maybe for the last few days, yes, but life changes constantly so it’s a never-ending battle,” she says.

Despite his challenges, Grayson is a straight A student and wants to be a scientist. Perhaps one day he’ll contribute to finding a cure for his disease, the ultimate way to “pay it forward.”