Grant's Story: Back on His Feet After Minimally Invasive Gallbladder Surgery 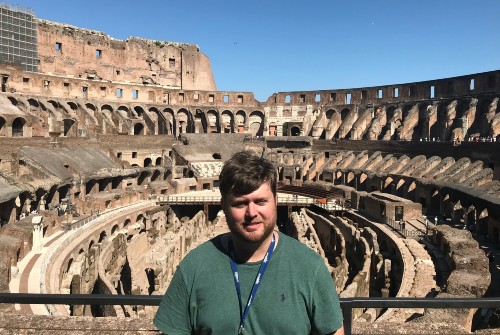 As Katy and the rest of Texas were experiencing the coldest temperatures in over 3 decades, Memorial Hermann Katy Hospital was seeing more than its share of action that frigid week in February.

Hospital staff and physicians were working around the clock through the inclement weather, staying at the hospital to make sure patients could get the care they needed. As temperatures slowly got back to normal, the hospital continued to stay busy. The hospital was helping patients with complications from COVID-19 as well as those requiring emergency surgery, like Grant.

Grant had been staying with his parents at their Katy home because the power was out at his Houston apartment when he suffered a severe gallbladder attack. “I had been having gallbladder trouble for over a year, and my gastroenterologist had recommended I get a surgery consult to have my gallbladder removed,” says Grant.

The gallbladder is a pear-shaped organ located just below the liver on the right side of the abdomen. Its function is to collect and store bile produced by the liver that is used for digesting food. Cholecystitis is a redness and swelling of the gallbladder that occurs when bile builds up in the gallbladder, usually due to the formation of gallstones that block the bile ducts that drain bile from the gallbladder, causing severe discomfort.

Taken to the Emergency Center at Memorial Hermann Katy Hospital in intense pain just before midnight, Grant was quickly checked in and led to an exam room. The physician on duty ordered lab work and an ultrasound of Grant’s upper abdomen.

By 3 a.m., the decision was made to admit Grant and take him to surgery to have his gallbladder removed. “The lab results revealed that his white blood cell count was extremely high, and the ultrasound revealed extensive inflammation of the gallbladder. I knew we needed to work quickly, so I prepared to perform a laparoscopic cholecystectomy,” says Dr. Jaime Roman-Pavajeau, a general and thoracic surgeon affiliated with Memorial Hermann Katy.

Laparascopic cholecystectomy (removal of the gallbladder) is a minimally invasive surgery in which the surgeon makes four small cuts in the abdomen to insert a laparoscope, a long fiber optic cable system which allows viewing of the affected area. It contains a thin, flexible tube with a light and tiny video camera. The fiber optic cable system is connected to a “cold” light source to illuminate the operative field and the abdomen is insufflated with carbon dioxide gas. Then special tools are inserted through the other incisions to remove the diseased organ.

“In my experience, male patients tend to have more inflammation with gallbladder disease. Due to the large amount of inflammation of Grant’s gallbladder, the surgery took more time than usual,” explains Dr. Roman-Pavajeau. While an open cholecystectomy requires multiple days in the hospital followed by 6 to 8 weeks of recovery time due to the larger incision, a minimally invasive laparoscopic cholecystectomy typically allows patients to be discharged the same day and resume normal activities within a week or two.

“I was relieved that Dr. Roman-Pavajeau was able to remove my gallbladder laparoscopically. His bedside manner really put me at ease as he explained the procedure and what to expect. I knew I was in good hands,” says Grant. Because laparoscopy minimizes incision size and pain as well as the risk of bleeding or infection, patients tend to recovery quicker. Grant was discharged the same day to recover at home. He returned to work the following week. “Several of my family members have been treated at Memorial Hermann Katy over the years,” added Grant. “I was really glad Dr. Roman-Pavajeau and the hospital staff were there for me the night I needed them.”

Thank you for contacting the Memorial Hermann Digestive Health. We have received your inquiry, and a team member will contact you soon.