James and Tracy: A Good Match for Life 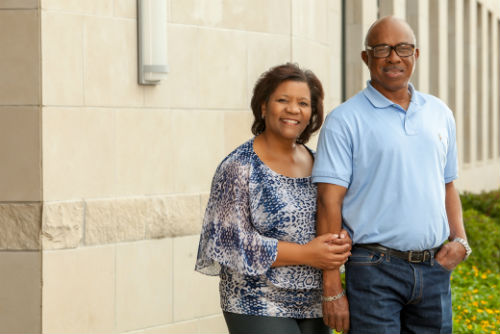 Tracy and James met at a 7 Eleven store in Bryan, Texas, and the two have been together ever since. On that day in March 1990, neither would have imagined that they would one day share a kidney.

“Tracy was coming in for a newspaper, and I was going in to get some candy,” James recalls. “For some reason all of a sudden she caught my eye, and I asked for her phone number. She said yes, we dated for about a year, and then I asked her to marry me.”

Tracy remembers the encounter slightly differently. “I gave him a really hard time,” she says. “I was, like, ‘Who are you anyway? Who comes up to someone in a 7 Eleven?”

James had been diagnosed with high blood pressure in the late 1980s, a few years before the two met. “That’s what started the ball rolling,” he says. “I was going back for regular checkups, and eventually they found that my kidneys were going bad and referred me to Memorial Hermann.”

James and Tracy had been married for nearly 10 years when his physicians recommended kidney transplantation. “My husband has five siblings and all of them were taking medication for high blood pressure, which ruled them out as potential kidney donors,” Tracy says. “I decided I would go through the tests to see if I was compatible. Everyone who knows me knows I hate needles, and all the labs required needles. You don’t know how many times I wanted to run away from those needles, but we got through it. After all the results came back, they discovered we were 90 to 95 percent compatible for donation.”

The couple’s surgeries took place at Memorial Hermann-Texas Medical Center in April 2000, when Tracy was 35 and James was 49. A few days after the surgery, James showed signs of rejecting the kidney. He remained in the hospital for two weeks on medication that halted the rejection process. “James came through the surgery fine,” Tracy says. “He was alert when he came out of recovery and up and around much sooner than I was. They had to remove a rib to reach my kidney so my recovery was slower.

Tracy returned to her job at Texas A&M University two weeks later. “It’s a big thing to give somebody a kidney,” James says. “A lot of people are skeptical about doing it and a lot of people don’t know you can live well with only one kidney. We’ve both been fine for the last 16 years. Her willingness to give me that gift saved me from dialysis and gave me my life back. I love her for it. She’s my rock.”

The two joke about their shared kidney. “James swears he has hot flashes now, and I always say, ‘Well, you do have my kidney, you know.’ And his family seems to think he’s more assertive now that he has part of me,” she says with a laugh. “He doesn’t take life for granted. He used to say let’s wait to do this or that. Now we know that life’s too short so we do a lot more.”

She advises people considering donating a kidney to listen to their heart. “We all have a purpose in life but we don’t always know what that purpose is. I had a force inside me that was pushing me to do something. I never thought I would donate anything, especially a part of my body. But yes, I would do it again.”

Kidney Transplant Transplant Request an Appointment or Refer a Patient