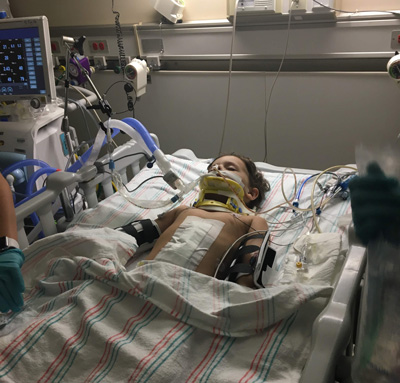 It is every parent’s worst nightmare. You’re going about your day. Everything seems normal. Then suddenly, without warning, your child is in grave danger.

What began as a typical weekday evening for the Guice family of Atascocita, Texas, almost became one of unimaginable loss when 3-year-old Grayson “Gray” slipped in the bathroom onto a ceramic trash can and was impaled by a broken shard. An injury of this magnitude could easily have cost the boy his life. Fortunately, everyone who responded – Gray’s parents, the 9-1-1 operator, the Houston Fire Department’s engine and medic crews, the Memorial Hermann Life Flight® crew and the skilled Memorial Hermann Trauma team – worked together seamlessly to save the boy’s life.

As was their regular evening routine, Gray and his twin brother were taking a bath. Their mom, Liz, had just bathed their 1-year-old sister and was getting her dressed for bed. Their dad, Tyler, describes what happened next. “I was just outside the bathroom, gathering the twins’ towels and pajamas, when I heard Gray scream. I ran into the bathroom to find him standing in the middle of the bathroom floor. Blood was streaming out of what looked like a bullet hole in his back. The shard, which looked like a giant shark’s tooth, had punctured his back and was lying on the floor, covered in blood. Liz ran to call 9-1-1. I wrapped him in a towel and took him to the sofa. He was moaning and crying, and after about three minutes began saying, ‘I want to go night night.’ A minute later, he passed out. A nurse who lives across the street came over and told us to keep pressure on the wound and try to keep him awake. But he was crashing, losing so much blood. My shirt was soaked through.” 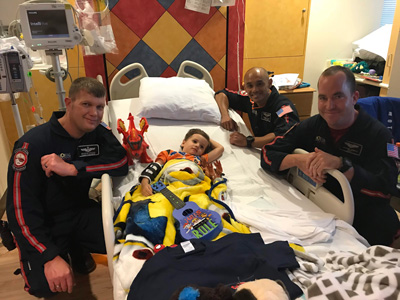 The 9-1-1 operator categorized the incident as a fall, and an engine crew from nearby Houston Fire Department Station 105, led by Captain D.J. Yarbrough, was dispatched. Because it was a basic (versus a medic) call, the station’s medic crew, M105, initially stayed behind.

“When they arrived,” says Tyler, “one of them began assessing Gray’s condition and asked me to lift him up so he could see the wound. He said, ‘Oh, wow,’ and alerted the captain to call in Life Flight® and the station’s medics.”

Fortunately, a Life Flight crew was already in the air, headed to Memorial Hermann-Texas Medical Center on another mission. They were diverted to the scene. Flight paramedic Brandon Crackel vividly recalls the string of actions that took place that day. “We had just started our shift and were a quarter mile from the medical center, headed there to pick up a perfusionist en route to a call in Lufkin. The pilot received a call for a pediatric trauma case. He acknowledged, and we converted. As we approached, we could see the HFD ambulance in the neighborhood. Things were happening so fast we didn’t even have a landing zone set up. We landed in an intersection two blocks from the boy’s house.”

As Life Flight was flying over the subdivision, M105 paramedic-in-charge Stacey Lejarza and paramedic Graciela “Gracie” Olivares arrived and began stabilizing Gray. “He was still responsive, but we could tell he was compensating. His heart rate was going up and he was ashen. He was losing a lot of blood and was going into shock,” says Olivares, who credits the captain for being instrumental in saving the boy’s life. “Captain Yarbrough made a decision that day that I believe saved the boy’s life. He called for Life Flight. Had he chosen to transport the patient via ground ambulance, I am certain the outcome would have been very different.” 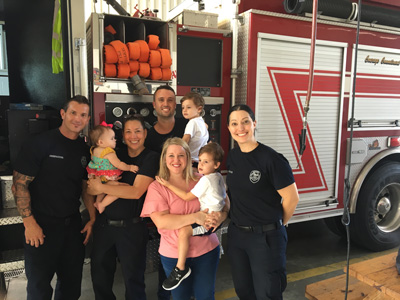 “This kid’s in trouble.”

“When we landed at the scene,” says Crackel, “we didn’t have any information about the boy’s injury. But when I saw him, I immediately knew, this kid’s in trouble. His breathing was shallow and slow. His heart rate was good, but I couldn’t get a pulse. As soon as we were in the air, I started an IV, thankfully on the first try. He started spiking blood, so we pushed multiple meds, intubated him [inserted a breathing tube] and gave him blood. His color and heart rate improved, but I never got a pulse. We knew we had to get him to Memorial Hermann before he went into cardiac arrest. We made it there in six minutes. If we had not already been in the air, or if we had not had blood products on the aircraft, he probably wouldn’t have made it.”

The minute the Life Flight team delivered Gray to the ED he had an ultrasound performed and received further blood transfusion by pediatric emergency medicine faculty member Dr. Hannah Smith. After only 12 minutes in the ED, the patient was rushed into a Memorial Hermann operating room, where affiliated trauma surgeon Ethan Taub, DO, began to stabilize him and prepare him for surgery. Shortly thereafter, he was joined by affiliated pediatric surgeon KuoJen Tsao, MD, the Children’s Fund, Inc. Distinguished Professor in Pediatric Surgery at McGovern Medical School at UTHealth. Together, the two surgeons performed emergency surgery.

“An ultrasound showed a lot of fluid in the boy’s abdomen, which we assumed was blood,” says Dr. Tsao. “The piece of pottery, shaped almost like a knife, had penetrated his back, severing his artery and vein that went to his right kidney. We looked at the kidney to see if we could repair it, but it was basically severed. He was bleeding out from it. So, we removed it.”

Dr. Tsao says the Memorial Hermann trauma “system” was instrumental in saving the boy’s life. “We’re set up to quickly triage and treat multiple trauma patients simultaneously. The speed with which we can stabilize and treat a patient, coupled with Life Flight’s ability to administer blood before a patient arrives at the hospital, likely made the difference in this case. After only six days in the hospital, the patient was released to go home, quickly recovered and is doing well.”

Dr. Taub concurs, adding, “We have the best trauma system and one of the biggest Level I trauma programs in the country. We treat over 8,000 trauma patients every year. In Gray’s case, everyone – the ground crew, the Life Flight crew who administered prehospital blood, and the ER and OR nurses and staff – worked together efficiently and effectively to save this boy’s life.”

“The best hospital on planet Earth.”

Liz and Tyler believe both medical and divine intervention saved their son’s life. “We see God in this story,” says Liz. “It seemed unreal, like a made-up story. But we knew Gray was in the best hospital on planet Earth. A lot of people worked hard. The EMS, Life Flight, the doctors, nurses and Child Life specialists. They all showed tremendous compassion. They are all geniuses. Everyone played their role, everything fell into place. We believe Jesus used modern medicine and these amazing people to save Gray’s life.”