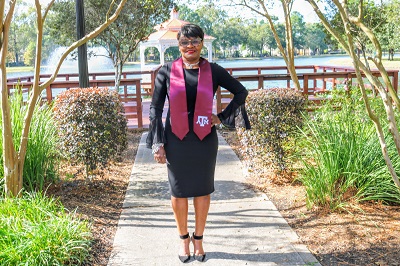 Women who get routine mammograms know the drill: Before the exam, you’re typically asked if you have experienced any changes in your breasts—including pain or changes in appearance—since your last mammogram. Those questions prompted 55-year-old Middle School Principal Andrea Deneé Cain to recall a “very weird, piercing pain” in her left breast six months prior, which at the time she dismissed as a fluke. And a blemish on that same breast, which she “didn’t think much of” either.

The signs were there, yet she had been too busy to pay them much heed. The day of her mammogram was New Year’s Eve 2018. It was her birthday, and Cain—Dr. Cain—had just received her PhD from Texas A&M University.

Cain says that she has received annual mammograms and ultrasounds since her early 20s, given she has dense breast tissue and a history of non-cancerous breast issues. (She underwent a needle biopsy for fibro-cystic breast disease in 1995and surgery to remove a benign tumor in 2006, both performed by general surgeon Mike Ratliff, MD, at Memorial Hermann Greater Heights Hospital.)

That day, in addition to her ultrasound, Cain requested a 3-D mammogram, an option that had recently become available to her. A few days later, she was called back for a needle biopsy, which, she says, she didn’t think much of because she had had biopsies before. She went to the appointment alone.

“At the end of the biopsy appointment, the radiologist showed me on my image what he called a radial scar, a benign breast lesion. He said they can be tricky because they can hide growths beneath them,” Cain says.

A week after the biopsy, Cain was referred to Dr. Ratliff for a surgical biopsy to determine the diagnosis. “Still, at this point, the word 'cancer' had never been spoken,” says Cain.

In her surgical follow-up appointment—to which she took her mom, who is a retired nurse, and two of her sisters—Dr. Ratliff explained that he had indeed found something beneath the radial scar. “He said it was very small, but it was cancer,” she remembers. “And I froze. I don’t remember anything he said after that. From that point on he was talking to my mom and my sisters.”

Cain was diagnosed with tubular breast cancer, a rare form of invasive cancer that accounts for approximately1 percent to 2 percent of invasive breast cancers. Dr. Ratliff subsequently performed a lumpectomy and sentinel lymph node biopsy to completely remove the tumor.

“Tubular carcinoma is rare but is, fortunately, a less aggressive cancer than the most common form of breast cancer, invasive ductal cancer,” says Dr. Ratliff. “Her nodes were negative, as is expected with tubular cancers. As a result, her overall outlook is excellent.”

Dr. Surapaneni told Cain that while she didn’t need chemotherapy, she recommended radiation therapy “as standard of care,” to prevent recurrence of her cancer. “Radiation treatment for breast cancer is, in the vast majority of cases, used in conjunction with definitive surgical treatment for best outcomes,” says Dr. Ratliff.

Cain underwent 3 weeks of full breast radiation followed by a boost, which she completed in May 2019.

From the moment she received her diagnosis, she never attended a treatment alone. She describes her experience as “very positive,” saying, “Dr. Surapaneni always asked us if we had any questions. Everyone was so nice.”

“This is the outcome you want,” says Dr. Surapaneni. “Because Andrea was vigilant about getting her regular screenings, her cancer was caught at an early stage and was small. She tolerated treatment really well and has a very good prognosis. She had great support from her family. And she is very willing to advocate for the importance of breast screening.”

After finishing her treatment, Cain shared her news at a large school district event. Afterward, she says, several women came up to her and said they were so moved by her story, they were going to schedule overdue mammograms. “I totally trust God that this was meant to be an opportunity for me to be there for someone else,” she says.