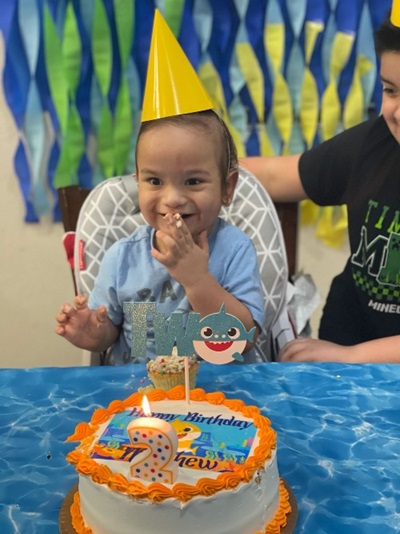 Pamela Alvarez exudes gratitude. Like most parents, she and her husband, Mike, are grateful to have  healthy children, but the couple are also eternally grateful for the generous kidney donor who gave their younger son, Matthew, a second chance.

Matthew’s journey began before he was born. During Pamela’s 16-week ultrasound, her obstetrician in the family’s (then) hometown of New Braunfels, Texas, saw what she initially suspected was a tumor in the developing fetus. She referred Pamela to a maternal-fetal medicine specialist in San Antonio, who told the couple that the “tumor” was actually the fetus’ bladder.

“The specialist told us the best place to go was Houston and referred us to The Fetal Center at Children’s Memorial Hermann Hospital in the Texas Medical Center,” recalls Pamela. “We got in the car and drove to Houston that same day.”

At The Fetal Center, an affiliated maternal-fetal medicine specialist explained that their unborn child suffered from lower urinary tract obstruction (LUTO). As pediatric nephrologist Rita Swinford, MD, associate professor and director of nephrology at McGovern Medical School at The University of Texas Health Science Center at Houston (UTHealth), explains, “The patient had a severe obstruction, or blockage, that prevented urine from filling the amniotic cavity, a condition known as oligohydramnios. The baby’s volume of amniotic fluid was decreasing to the point where fetal maturation would be compromised, so doctors implanted a shunt, or draining tube, into the fetus’ bladder, to allow the urine to drain out of the bladder into the amniotic sac.”

“Two appointments later, the fluid was still building, and doctors were trying to mentally prepare us to lose him,” says Pamela. “Then, miraculously, the flood gates opened.”

A second blockage occurred, however, and physicians prepared the family for a range of outcomes. “They said they weren’t sure if the baby would make it to 32 weeks, but if he did, we’d deliver at 32 weeks,” says Pamela, “It was a very traumatic time.”

Meanwhile, the couple was driving to Houston each week for an ultrasound, to check on the baby’s progress. “I hated that those trips kept me from being with our other son, AJ, but every time I heard the baby’s heartbeat, it made my whole week,” says Pamela.

The couple credits Dr. Swinford for helping them through some excruciating decision-making. “She told us that our baby could have a good quality of life, even if he were on dialysis his entire life,” says Pamela. “She helped us feel secure and confident in our choice to move forward.”

On December 27, 2018, at 32 weeks’ gestation, Matthew Alvarez was born via cesarean section at Children’s Memorial Hermann Hospital. The delivery went smoothly. Immediately after birth, nephrologists inserted a nephrostomy tube into the Matthew’s kidneys to try to relieve pressure and to kick-start them, but the kidneys did not respond. Two weeks later, Matthew began dialysis in anticipation of receiving a kidney transplant, and Mike and Pamela made the decision to move the family to Richmond, Texas, to be closer to his medical team. 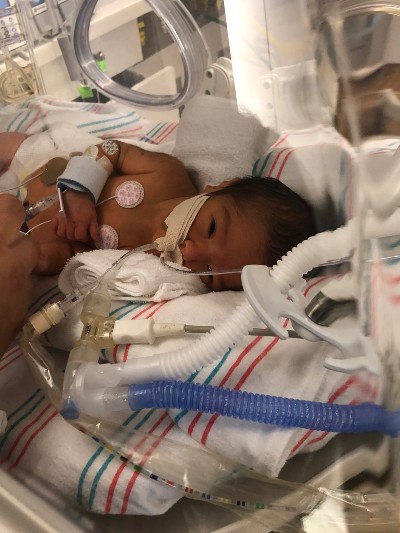 The couple met with Sarah Arldt, an affiliated pediatric abdominal transplant coordinator at the Transplant Center at Memorial Hermann-Texas Medical Center, to learn about the transplantation process, from Matthew’s initial evaluation through getting on the transplant list to transplantation and ongoing care. “She was there any time we needed her,” says Pamela. “She is just phenomenal.”

Matthew remained in the NICU at Children’s Memorial Hermann Hospital for nine months during which time he underwent dialysis and was cared for by a multidisciplinary team of specialists and other healthcare providers, including nephrologists, NICU nurses, a dietitian, a nutritionist, child life specialists, social workers and others.

The goal was to keep Matthew alive and to help him grow large enough to undergo the transplant. As affiliated surgeon J. Steve Bynon, MD, professor and director of immunology and organ transplantation at McGovern Medical School at UTHealth and chief of abdominal transplantation at Memorial Hermann-TMC, explains, a child must be large enough—at least 10 kilograms or about 22 pounds—to safely undergo a kidney transplant.

On June 28, 2020, Dr. Bynon performed the transplant, successfully replacing Matthew’s diseased kidneys with a deceased donor’s kidney. Pamela says Dr. Bynon was extremely empathetic, and his knowledge and confidence put her and her husband at ease.

Initially, Matthew returned to the Transplant Center three times a week for a clinic visit and lab work, which will slowly taper off. He will be on immunosuppressant drugs for the rest of the transplant kidney’s life, to reduce the risk of his body rejecting it, which requires careful monitoring. And he will likely require an additional transplant in the future, given the average “half-life” of a deceased donor kidney is between 10 and 15 years, says Dr. Bynon, referring to the point at which half of kidney recipients still have their donated kidney and half will have lost it due to rejection or some other cause.

Pamela says the physicians and staff at the Transplant Center were all “top notch.” “They are part of our family now.”

Pamela cannot wait for the pandemic to end so she can take Matthew out to explore the world. And as the one-year anniversary of Matthew’s transplant approaches, she looks forward to sending his donor’s family a letter to express their overwhelming gratitude for their loved one’s gift.

“We made a promise to ourselves that we would celebrate that child’s life every single day. Not a day goes by that we don’t appreciate that gift,” she says, tearfully.

Everyone in her family is now a registered organ and tissue donor.