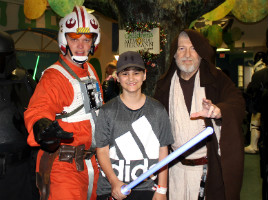 In honor of today’s much anticipated theatrical release of “Star Wars: The Force Awakens,” characters from the world-renowned film series surprised pediatric patients at Children’s Memorial Hermann Hospital on Friday morning, bringing lightsaber-lit smiles to faces of the kids and parents alike.

The visiting group was made up of members from the Star Garrison (representing Texas and Oklahoma) of the 501st Legion. The 501st Legion is a worldwide Star Wars fan club that celebrates the Star Wars universe using costumes and props, in particular those of the Stormtroopers, Imperial forces, other various "bad guy" characters and, of course, Darth Vader.

“Whether it is visiting local children's hospitals, participating in benefits that support children, or just having fun at conventions, our desire is to bring the joy of the Star Wars universe we had growing up to the children of this generation,” reads the group’s mission statement on their website.

“Some of our patients have been looking forward to this visit for many weeks,” said Richard Weir, Director of Child Life and Expressive Therapies at Children’s Memorial Hermann Hospital. “We are so grateful to the Star Garrison for taking the time to stop by today of all days, which most certainly has to be their busiest day in years. Much joy to all this event did bring.”