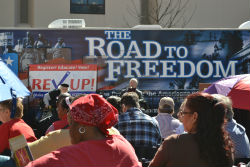 Today the American Association of People with Disabilities (AAPD), along with Texas Disability Project, Disability Rights Texas and other disability advocacy groups launched the national ‘REV UP’ America-Make the DISABILITY VOTE Count campaign at TIRR Memorial Hermann in Houston, Texas.

As part of the kick-off, voter registration booths were set up at the nationally-renowned rehabilitation hospital and information on issues important to the disability community was provided. ‘REV UP’ stands for Register, Educate, Vote, Use, Power. The REV UP event at TIRR Memorial Hermann promotes the growing influence of the disability vote nationwide. REV UP will also work to ensure access to the polls on Election Day for Americans with disabilities.

The ‘Road to Freedom’ ADA Bus also made a stop at the REV UP kickoff event at TIRR Memorial Hermann. The bus just completed the ADA Legacy Tour logging more than 23,000 miles and making more than 115 stops in 33 states designed to raise awareness and build excitement around the 25th anniversary of the Americans with Disabilities Act.

According to the Rutgers University School of Labor and Management study, voters with disabilities made up the second largest minority voting bloc in the 2012 election. “We know people with disabilities are about 20 percent less likely to vote or even be registered to vote compared to other groups. We want to change that and encourage our community to get involved in the process and get out and vote,” says Frieden.

TIRR Memorial Hermann is home to the Southwest ADA Center. Anyone seeking information about the ADA or other disability rights laws can call the center at 1-800-949-4ADA (4232).

For more information on the REV UP America-Make the DISABILITY VOTE Count campaign, visit aapd.com/REVUP.