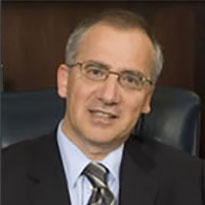 Giuseppe N. Colasurdo, MD, an internationally known physician, researcher and educator, has been named dean of The University of Texas Medical School at Houston, effective Sept. 1.

Dr. Colasurdo, who has chaired the Department of Pediatrics since 2005, joined the UT Medical School's faculty in 1995 as an assistant professor of pediatrics in the Division of Pulmonary Medicine. He became the division head in 1997 and has directed the fellowship training program in pediatric pulmonary medicine since 2001.

"Dr. Colasurdo will be a great dean of our Medical School," said James T. Willerson, MD, president of The University of Texas Health Science Center at Houston. "He is an outstanding leader, physician-scientist, educator and builder. He will build on the very important earlier efforts of Drs. Jerry Wolinsky, Stan Schultz, Max Buja, John Ribble, Cheves Smythe and others and will lead our Medical School into the very top echelons of medical schools in the country in a relatively short period of time."

Jerry S. Wolinsky, MD, professor and holder of the Bartels Family and Opal C. Rankin Professorships in Neurology, has served as the interim dean since June 2006. Prior to that, Stanley Schultz, MD, was dean from June 2004 until he stepped down for health reasons.

"We are very grateful to Dr. Jerry Wolinsky, who stepped in as interim dean and has worked very hard to achieve progress in our Medical School, recruiting some excellent new leaders, developing new programs and being concerned with financial and compliance matters," Willerson said. "Dr. Wolinsky will now return to his original role as a physician-scientist and educator with our gratitude and deep appreciation."

"Dr. Colasurdo has been an important physician leader and a valuable asset to the Memorial Hermann system during his tenure as physician-in-chief for Children's Memorial Hermann Hospital," said Dan Wolterman, Memorial Hermann System president and CEO. "He brings a wealth of knowledge and experience to this exciting position, and I truly believe his leadership will inspire a new era of excellence for The University of Texas Medical School at Houston."

"I am delighted that Dr. Colasurdo will be the next dean of the Medical School," added Juanita Romans, CEO of Memorial Hermann-Texas Medical Center. "Given his distinguished record as physician-in-chief for Children's Memorial Hermann Hospital, I think that this is the perfect match. I look forward to partnering with Dr. Colasurdo as he leads UT's medical school, and I am confident that his dedication to delivering the highest quality, patient-focused outcomes will help both our institutions become the best of the best."

Dr. Colasurdo earned his medical degree at G. D'Annunzio School of Medicine in Chieti, Italy, and completed his residency training at The University of Texas Medical Branch at Galveston. He completed his fellowship training in pulmonary medicine at the University of Colorado Health Science Center and the National Jewish Research and Medical Center in Denver.

"The UT Health Science Center at Houston has a solid foundation, and our numerous strengths and talents will lead to a future of excellence in our educational and research programs," Dr. Colasurdo said. "The clinical endeavor will be powered by a strong partnership with a national leader in health care, the Memorial Hermann Healthcare System, and will continue to build centers of excellence led by the UT physicians."

Dr. Colasurdo will remain the chairman in the Department of Pediatrics for approximately one year while a search committee is formed to identify and recruit a new chair.