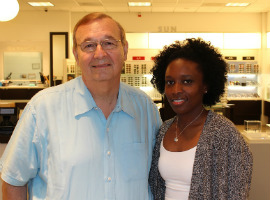 Last month, Peter Hanik was shopping with his wife Brenda for a new pair of glasses at the LensCrafters inside Baybrook Mall when he unexpectedly collapsed. Luckily, Brittney Frazier, RN, a pediatric special care nurse at Children’s Memorial Hermann Hospital, was nearby to immediately begin CPR.

“I was sitting down getting fitted for glasses when I heard a noise and saw him collapse,” Frazier said. “I ran over, went into ‘nurse mode’ and started doing CPR. He didn’t have a pulse and I was yelling out for anyone to help me. Nothing like this has ever happened to me and I was running on adrenaline. This just shows that you always have to be prepared because you never know what can happen.”

Hanik suffered from ventricular fibrillation, the most serious cardiac rhythm disturbance according to the American Heart Association. Shortly after Frazier began CPR, LensCrafters personnel and mall security obtained the mall’s Public Access Automated External Defibrillator (AED) which was used several times before the Houston Fire Department (HFD) EMTs and paramedics arrived. Hanik was then shocked seven more times and given advanced life support before he finally regained a pulse.

“I am unbelievably grateful to Brittney for stepping in and performing CPR on me. If she had not been there, who knows what may have happened,” said Hanik.

A month later, Hanik returned to Baybrook Mall where he and Frazier were reunited for the first time since the incident (see picture above). Frazier, along with the others in the chain-of-survival, was honored in a ceremony hosted by HFD, recognizing and thanking her for her heroic actions.

“It’s amazing to see him looking so great today. I honestly didn’t know if he was going to make it, so I’m thrilled we are able to have this reunion,” Frazier said. “We have patients come back and thank us from time to time, but this one was really special to me. It should be a lesson for everyone to learn CPR. It may seem like an eternity while you’re waiting for the paramedics to arrive – even if it’s only a matter of minutes – but every second truly counts, and it helps so much if someone is able to step in while the first responders are on their way. It makes me happy to see such a good outcome.”