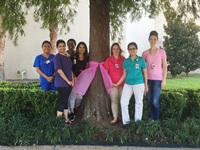 Visitors to Memorial Hermann Southwest Hospital will be “seeing pink” during the month of October. Recently, several employees spent hours tying pink ribbons around the trees on campus in recognition of Breast Cancer Awareness Month.

According to the American Cancer Society, about 246,660 new cases of invasive breast cancer will be diagnosed in women this year. “It’s my way of supporting patients who are fighting this battle but also to raise awareness in the community and to remind women to get their annual screening done,” says Sejal Patel, manager of outpatient imaging at Memorial Hermann Southwest.

“For me, the message is that we stand together in support of survivors and as advocates for prevention and early detection of breast cancer,” says Becca Gagnon, marketing manager, Memorial Hermann Southwest. “Nearly all of us have been touched by breast cancer whether as a survivor, a caregiver or a friend. These ribbons represent all of us.”

In addition to the pink ribbons dominating the campus, throughout the month of October, the tower at Memorial Hermann Southwest will be lit up in pink as a show of support to the estimated 2.8 million breast cancer survivors in the United States.

To schedule your annual screening mammogram or to learn more about the breast care services offered through MD Anderson Breast Care with Memorial Hermann-Southwest call 877-40-MAMMO (62666).