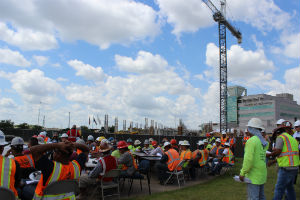 Construction is well underway at Memorial Hermann Sugar Land Hospital. Work on the 155,000 square-foot patient tower is on schedule for completion in September 2016 and the 100,000 square-foot Medical Plaza 2 building is scheduled to be finished up by November 2015.

On Monday crews put down their hammers, shut down the cranes and stopped pouring concrete to take part in the Occupational Safety and Health Administration’s (OSHA) National Safety Stand-Down. The purpose of the National Fall Prevention Stand-Down is to raise awareness of preventing fall hazards in construction.

“Safety is a top priority of ours every day,” says Todd Harvey, director of Engineering Services at Memorial Hermann Sugar Land. “It’s important to set aside the time to help reinforce the safety practices we already have in place on site.”

At Memorial Hermann Sugar Land crews listened to a presentation on fall hazards and the importance of fall prevention. The topic is timely considering during fiscal year 2014, fall prevention safety standards were among the top 10 most frequently cited OSHA standards nationwide.