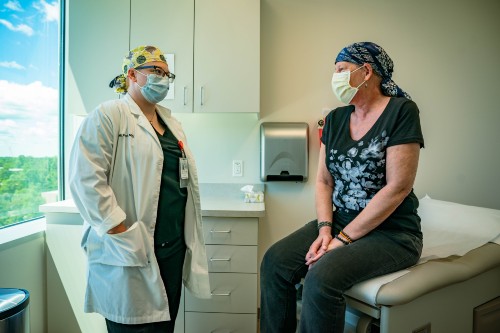 When Karen Cole finally sought medical care for the tumor growing in her right breast, the tumor measured 24 centimeters and weighed nearly 10 pounds.

“I called it my monster,” says the petite 58-year-old from Montgomery, Texas. “I knew it was killing me, but I was upset and panic-stricken. And the more upset I got, the bigger it got.”

She noticed about a year earlier that one breast was a different size than the other but chalked it up to her poor posture at her computer. Plus, she rationalized, fibroids run in her family. Then as her tumor—and her concerns—grew, she thought she could control it with herbal remedies and castor oil packs. A self-described sufferer of “white coat syndrome” (a fear of doctors), she says that about the time she finally mustered the courage to seek medical care, COVID-19 hit. And then she had health insurance issues.

“There were all these little roadblocks,” she says.

In March 2021, her husband, Alan, made an appointment for her. “Alan is my rock,” she says. “He made every call, every appointment for me. He took care of me. Without him, I wouldn’t be here today.” She says her friends and family are also a part of her support team.

Karen was seen by breast surgical oncologist Diana Hook, MD, and medical oncologist Kruti Nair, MD, both of whom are affiliated with Memorial Hermann The Woodlands Medical Center.

A staging PET/CT scan revealed small lesions in her lungs and spine, which were suspicious for metastatic disease. “The lesions were too small to biopsy at the time but were characteristic of this type of cancer, which tends to spread, or metastasize, to the lung and bone,” says Dr. Nair.

Given likely advanced disease, along with a large primary tumor, the normal course of action would be chemotherapy. However, due to the often low response rates to chemotherapy reported with this cancer, and size of her tumor, Drs. Hook and Nair agreed to a palliative resection first, with an aim to restore her quality of life.

“When I first saw Karen, she had not been out of the house for 6 months,” says Dr. Hook. “She couldn’t go for a walk or go to the grocery store. She was miserable.”

Dr. Hook consulted with plastic surgeon Bryan Correa, MD, affiliated with Memorial Hermann The Woodlands, about the feasibility of surgically removing the tumor. “We knew we needed to remove the tumor, but we needed to do so with negative margins,” says Dr. Hook. “And I wanted to make sure we could successfully close the defect created by the resection.”

In May 2021, Dr. Hook surgically removed the tumor, and Dr. Correa closed the incision using a skin graft from her leg and a tissue flap using a muscle from her back. The 7-hour surgery, performed at Memorial Hermann The Woodlands Medical Center, was a success. Two weeks later, Dr. Hook surgically implanted a port for the administration of chemotherapy.

Karen is currently receiving chemotherapy and immunotherapy under Dr. Nair’s care. “The goal of treatment is to keep her disease from growing further. If her cancer remains stable, we will consider breast radiation to help with local control, followed by maintenance treatment. We are taking it month by month, but she is extremely well so far in her journey,” says Dr. Nair.

Both physicians are amazed at how her outlook has changed. “When we first saw Karen, she was suffering and super anxious,” says Dr. Hook. “Two weeks after her surgery she was pain free and all smiles, walking on sunshine.”