David and Gam: A Son Gives Life to His Mother 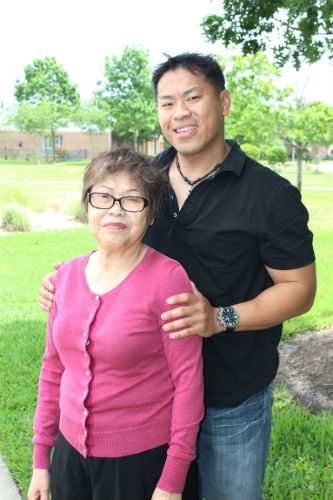 Diabetes and high blood pressure are the two most common causes of end-stage kidney disease. The progression of both conditions over more than 15 years of Gam’s life led to chronic kidney disease. By 2010, the 66-year-old mother of four boys was in borderline kidney failure, and her nephrologist warned her family to be prepared for dialysis.

“When we learned this, we as a family started looking at options and one of those options was transplantation,” says her 43-year-old son David. “Two of my younger brothers had families with young boys, and my youngest brother was just beginning to blossom into his life, so they were not great candidates. I made the decision that I wanted to donate a kidney to my mom if we were a match. In the beginning she disagreed. As a mother she didn’t want to take her son’s kidney. Traditional Vietnamese views hold the eldest son responsible for taking over the role of father in the household when the father passes away, which is why most Vietnamese families value having a son as the firstborn child. She didn’t want to do anything to put me at risk of dying before she did.”

The family discussed transplantation with her for more than a year. “We as a family urged her to leave no stone unturned in fighting for the precious gift of life,” David says. “We told her, ‘God gave you this most sacred gift and you have to do everything possible to protect that. Mom, you have to stay around for your grandkids.’ She was very courageous in going against her traditional beliefs and in her willingness to undergo a major operation at her age.”

By 2011, Gam had four grandchildren under the age of five and kidney function of only 7 percent, not enough to meet the needs of daily life. When function falls below 5 percent, dialysis is highly recommended.

“She was weak and tired but still treading water,” David says. “We made the decision to have the lab work done to determine if my mother and I were a match. Once they determine you’re a match, they evaluate you to see if you’re healthy enough to donate a kidney. I passed all the exams and was cleared as a donor.”

As Gam was going through the evaluation process, she encountered an obstacle: the transplant team found lesions on her liver in one of the last remaining tests. The doctors could not move forward until they were certain the lesions were benign.

“She would have to undergo a CT scan, which involved injecting a dye through an IV,” David says. “The extra work her kidneys would have to do to flush the dye from her body would lower her kidney function further and push her into dialysis. Rather than do that, the family decided to let nature take its course. If the transplant couldn’t be done, we could accept that we didn’t make a decision that would require dialysis. We thought that it wouldn’t be long before she required dialysis and when that happened, we would go forward. So after we had the entire transplant workup, we put it on hold.”

Gam remained at 7 percent function for about another year. After routine lab work late in 2014, the family learned that her kidney function was less than 5 percent. “They highly recommended dialysis,” David says. “I said to the transplant team, ‘Let’s get that workup.’ Because it had been over a year, they had to redo all the labs. When they did the liver scan with dye, it turned out to be natural lesions that occur with age.”

David was standing in an Ace Hardware when he received the call about the results of the last test. “For a brief moment, time stood still,” he says. “I told the transplant team that I needed six weeks to tie up all loose ends and we agreed on a transplant date in late August. I recall how beautiful the trees and grass were as I was driving home, and remember thinking that all I wanted was for my mother to be okay, because she was too frail to deal with complications. I asked God to please grant me this one wish and promised never to ask for anything else.”

The donation and transplant were done on August 22, 2014, at Memorial Hermann-Texas Medical Center. David’s initial recovery was harder than his mother’s. “The day after her surgery she was a totally new person,” he says. “She woke up and said, ‘I’m hungry. When are we going to eat?’ She was strong, healthy and very hungry. Before the transplant she never felt like eating because she was always sick and tired and weak.”

Since the transplant, Gam has enjoyed spending time with her grandchildren. “I see the four little boys every day and value my health more than I ever did,” she says. “After so much pain and suffering, it’s wonderful to feel great again. I’m amazed at what my son did and can’t believe that it truly happened. I thank God every day and pray that my son will never have any problems as a result of the surgery.”

David believes that his mother’s decline and his deep involvement in the state of her health happened at that particular time in his life for a reason. “My work was so time consuming that I never saw my mother,” he says. “About five years ago I saw her for the first time in about six months, and my jaw just hit the ground. She looked terrible, like she was dying. I thought what does work matter? That’s when I told her, ‘Mom, I’m going to help you.’ My family has always been healthy, but Mom grew up poor in Vietnam with bad eating habits and not enough drinking water. Because we had all been healthy, we thought even with diabetes, she’ll be fine. That’s how we treated it for 15 years.”

When he started participating fully in his mother’s health, he learned that she was taking several medications and injecting insulin. “I started talking to her doctor and asking, ‘Why is she taking this? What’s that medication for?’ We took over. My job could wait.”

The family investigated other transplant centers but chose Memorial Hermann. “We felt more comfortable there,” he says. “How you feel about your team makes a big difference in your result. If you’re considering donating or transplantation, choose a team that makes you feel strong, confident and at home.”