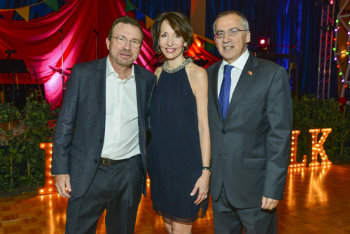 Hannah Storm, easily recognizable as an anchor of ESPN’s “SportsCenter,” returned to her adopted hometown on Saturday, November 9, to emcee the 2nd Annual Under the Boardwalk Gala benefiting Children’s Memorial Hermann Hospital. Storm is also the founder of the Hannah Storm Foundation. More than $460,000 was raised from the 2013 gala, which took place at the Bayou City Event Center.

The great thing is that children benefiting from this fund will be seen by the experts at Children’s Memorial Hermann Hospital,” Storm said. “This is an effort that we wanted to start now and hope to keep supporting for years to come.”

Chaired by the father/son duo Fred and Jay Zeidman, the Under the Boardwalk Gala honored The University of Texas Health Science Center at Houston (UTHealth) President Giuseppe Colasurdo, MD. An internationally known researcher and pediatrician, Dr. Colasurdo specializes in the diagnosis and treatment of respiratory syncytial virus (RSV), pediatric asthma, and other lung disorders in infants and children. He previously served as McGovern Medical School at UTHealth’s chair of the department of pediatrics and as the physician-in-chief at Children’s Memorial Hermann Hospital.

We were thrilled to have the opportunity to collaborate with Hannah Storm on Under the Boardwalk,” said Susie Distefano, CEO of Children’s Memorial Hermann Hospital. “The generous donations from the event will go to help many of our pediatric patients in special need.”

We could not have been more delighted and thrilled with the outcome of the event,” added co-chair Fred Zeidman. “It gave us the wonderful opportunity to recognize Giuseppe Colasurdo, MD, and his incredible contributions to Children’s Memorial Hermann Hospital and McGovern Medical School.

Under the Boardwalk featured carnival games, dancing to the musical stylings of Infinite Groove and gourmet boardwalk cuisine created by Tony’s. Darryl Murchison of Darryl & Co. transformed the Bayou City Event Center into a fun-filled carnival complete with a carousel and whimsical centerpieces that appeared to be giant ice cream sundaes and boxes of popcorn. More than 500 guests were in attendance including 150 young professionals.