TIRR Memorial Hermann Hotwheels On The Road To A Championship 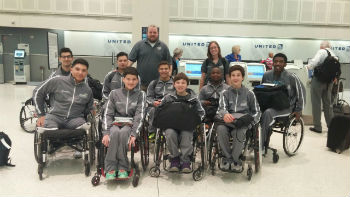 Elkins High School Senior, Fabian Romo is one of the team’s leaders and was part of the junior Hotwheels National Championship team in 2013. “I sort of have an older brother mentality now, I want to take care of everybody and lighten up the mood,” says Romo. “This is my family and winning another championship with my family would be amazing.”

At a recent practice the team was presented with some new warmups, bags and beanies for their trip to Louisville. “We’re very proud of our teams,” says Carl Josehart, Sr. Vice President and CEO, TIRR Memorial Hermann. “We want them to feel great and look great when they take the floor in Louisville. We want them to know the entire TIRR family is behind them.”

There’s a lot of truth to that statement. It’s not uncommon to find Jerry Ashworth, FACHE, director of hospital operations at TIRR Memorial Hermann, practicing with the team on Tuesday nights at the West Gray Metropolitan Multi-Service Center in Houston. “I grew up playing basketball and I am amazed at the level of skill in which they play the game,” says Ashworth. “When I play along at practice I am out of my league.”

Abraham Hausman-Weiss is a junior at The Emery/Weiner School in Houston. “I love the comradery of this team,” said Hausman-Weiss. “When we moved here from Alabama I was looking for a team and started reading about the Hotwheels and thought, wow, they’re a really good team. It’s exciting to contend for a National Championship.”