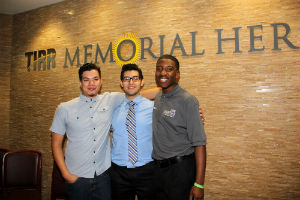 It was an emotional evening filled with laughter, cheers and even a few tears. Three seniors, Cypress Ranch High School’s Victor Meza, Elkins High School’s Fabian Romo and Summer Creek High School’s Daquan Minor, have each played their last game for the Hotwheels. Meza and Romo offered up words of encouragement to their younger teammates.

“I call you guys my family because that’s what we are, a family,” said Meza. “Nobody here is handicapped, we’re handi-capable.”

“We won with passion, determination and perseverance. There’s so much I could say,” said Romo. “I wanted this for all of you, not me. I can’t believe it’s over. I love you guys.”

Lex Frieden, director, Independent Living Research Utilization program at TIRR Memorial Hermann, professor, UTHealth School of Biomedical Informatics, served as the banquet’s keynote speaker. Frieden is considered a chief architect of the Americans with Disabilities Act. “You’re champions and others will be watching you,” said Frieden. “Be a leader, be responsible and apply the skills and qualities you used to win a championship to your life.”

The junior Hotwheels spent most of the season ranked number one in their division and entered the national championship tournament with all the pressure of a number one seed. The Hotwheels defeated teams from Chicago, Michigan, Dallas and Minnesota on their way to the national title.

Trice Ham is the head coach of the Hotwheels. It was clearly an emotional night for him as he recognized each departing senior individually. Ham began his speech by saying, “Good teams win games, great teams…” he paused as the team said in unison, “respond to adversity.” Ham talked about the adversity each young man has experienced in life and on the basketball court.

“I promise you’ll face adversity your whole life,” said Ham. “It’s what happens next that defines you. You can quit or you can stand tall and keep plugging away.”

The Hotwheels have a strong group of underclassmen returning next season. Abraham Hausman-Weiss is a junior at the Emery/Weiner School in Houston. Hausman-Weiss was named a second team All-American and earned first team honors on the All-Academic team at the national tournament.

Carrington Marendes, brothers Aaron and Peter Berry, Angel Palomares and Dustin Stallberg are also members of the championship team and expected to rejoin Hausman-Weiss for next season.