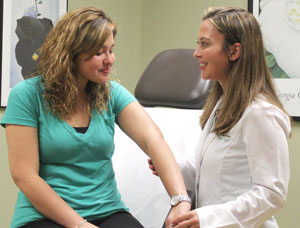 A recent report from the acting U.S. surgeon general says there has been an alarming 200 percent jump in deadly skin cancer cases since 1973.

One out of every five people in the U.S. will develop skin cancer sometime during his or her life. It is estimated that about 50 percent of all people who live to age 65 will develop at least one form of skin cancer.

“Since skin cancer is highly preventable, embracing sun protection this summer and year-round is crucial,” said Karrie Amor, M.D., a dermatologist affiliated with Memorial Hermann Southwest Hospital. “But, everyone should see their doctor for regular skin checks. If detected early, skin cancer is almost 100 percent curable.”

Skin cancer can be divided into two major types: non-melanoma and melanoma skin cancer. Malignant melanoma is the more deadly of the two.

The American Cancer Society estimates that there will be more than three million people diagnosed with non-melanoma skin cancers in 2014. Approximately 76,100 people will be diagnosed with malignant melanoma.

The primary cause of all types of skin cancer is exposure to ultraviolet radiation (UV) — the sun. It is easy to get a sunburn in Texas because of the state's geographic location, mild climate, and the many opportunities to work and play out of doors. Reflections of the sun's rays off water or sand can double your ultraviolet radiation exposure.

Clouds don’t block out UV rays. When the weather is cloudy, cool, and breezy, we may not become hot or realize the amount of UV exposure until after we have developed a sunburn.

Studies suggest that heavy sunlight exposure in the first few decades of life may be of the greatest importance in determining a person’s risk for skin cancer. A blistering sunburn in childhood or adolescence doubles the risk of developing a skin cancer.

It is estimated that by the time someone reaches the age of 18 they have already obtained 80 percent of their lifetime UV light exposure.

Besides avoiding the sun, early diagnosis and treatment are the next best prevention options, says Amor.

Make it a habit to check your skin for abnormalities and changes. Look at each of your moles and evaluate them using the following ABCD test recommended by the American Melanoma Foundation:

A positive finding of any of the ABCDs may indicate the mole is a malignant melanoma.Malignant melanoma can develop anywhere on your skin, so wear appropriate protective attire including long sleeves and hats, avoid working in the sun if possible, use sunscreens, and do regular self-examinations. Protect your eyes from the harmful ultraviolet rays by using gray or brown lenses that offer both UVA and UVB protection.

Dr. Amor recommends everyone between 20 to 40 years old get a cancer-related checkup including skin exam every three years, and every year for people 40 or older.

Take charge of your skin. Get regular checkups and take precautions when you are out in the sun. As the slogan from Cancer Council Victoria in Australia says, remember to “Slip, Slap, and Slop.”

Ask your Memorial Hermann Southwest doctor about your risks at your next appointment.