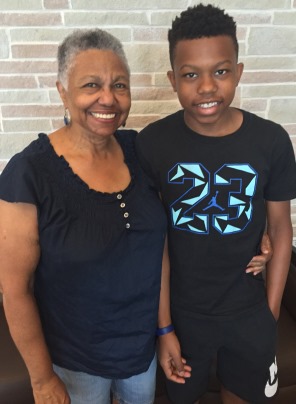 It started as a typical Friday night for 69-year-old Patricia Franklin. The Katy resident watched her grandson Jordan play football, but on the way home, her right temple began to throb. Franklin chalked it up to overexertion, thinking rest, a bowl of ice cream and a few minutes of television might make her feel better.

That’s when things began to take a turn for the worse. When Franklin stood to take her bowl to the sink, it fell from her hands. She looked down and noticed her left arm was dangling at her side.

Not recognizing the symptoms of stroke, she declined her daughter’s suggestion to visit an emergency room. Instead, she went about her bedtime routine. When she couldn’t put on her night gown or climb into bed, she knew it was time to take action.

“Because stroke affects the brain, patients may not realize they are having a stroke,” said Jose Diaz, MD, stroke neurologist affiliated with Memorial Hermann Katy Hospital and Franklin’s physician. “Symptoms are distinct, appear quickly, and include sudden weakness or numbness of the face, arm or leg; sudden confusion or speech difficulty; sudden vision impairment; sudden trouble walking, dizziness, loss of balance or coordination; and a sudden severe headache with no known cause.”

Franklin’s daughter rushed her to a nearby emergency room, where it was discovered that she had a stroke. Franklin received the clot-busting drug tPA and was transferred to Memorial Hermann Katy Hospital for further treatment and observation.

Today, Franklin is on the mend, but she shares her story to educate others on the signs and symptoms of stroke.

“I was in denial that it was a stroke. I didn’t have a family history of stroke and I was a healthy, non-smoker with normal blood pressure,” said Franklin. “Hindsight is 20/20. Now I know I had the classic symptoms of stroke and I’m fortunate that I sought medical treatment in time.”

To a bystander, someone having a stroke may just look unaware or confused. Stroke victims have the best chance if someone around them recognizes the symptoms and gets help quickly. Memorial Hermann recommends F.A.S.T. as an acronym to remember the sudden signs of stroke:

To find out if you are at risk of stroke, talk with your health care provider.

Memorial Hermann Katy has earned the Gold Seal of Approval from The Joint Commission (TJC) for Advanced Stroke Certification and the American Heart Association/American Stroke Association’s Heart-Check mark for Primary Stroke Centers. Additionally, the hospital was recently awarded the American Heart Association/American Stroke Association’s Get With The Guidelines®–Stroke Silver Performance Achievement Award, which recognizes the hospital’s commitment and success in implementing a higher standard of stroke care by ensuring stroke patients receive treatment according to nationally accepted standards and recommendations.